Died non Battle 14 September 1943
Major Henderson was assigned to the Sepcial Operations Group and was aboard aircraft B-17E with serial number 41-9051, nickname Flaming Mayme, when it crashed on the upper slopes of Skiddaw in the Lake District in England.

They were undertaking a navigation exercise flying from RAF Alconbury in Cambridgeshire to RAF Turnhouse near Edinburgh when the aircraft crashed in low cloud. They may have been preparing to land, possibly the navigator – unused to the nature of flying in British weather – was unaware the aircraft was a long way off course. 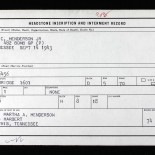