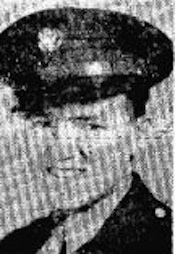 12 Nov 1947 – Kingsport, Tennessee
Sullivan County’s first two returning war dead from the European Theater of Operations are expected to arrive on successive days this week, one coming to Kingsport and then continuing to Blountville, while the other goes to Bluff City. The body of sergeant Thurman H. Olinger, 23, is scheduled to arrive in Kingsport at 2:35 p.m.. Sgt. Olinger, son of Mr. and Mrs. B.H. Olinger of Blountville, died January 5, 1945 in Belgium. A graduate of Blountville High school in 1941, Sgt Olinger was employed by Tennessee Eastman Corporation until he entered the Army January 12, 1943. An engineer on a B-26 bomber, Sgt Olinger flew 14 missions over Germany, and was awarded the Purple Heart and several flying medals. He was born in Scott County, Virginia and  was a member of the Baptist Church. An honor guard of VFW members will meet the train in Kingsport. A military burial service will be conducted by the American Legion. Burial will be in New Gunnings Cemetery. Beside the parents, survivors include a brother, Arthur V. Olinger of Blountville, and three sister, Miss Madeline Olinger and Mrs. Opal Hooker, Blountville and Mrs. Elizabeth Clarke, Brookville, Ohio. 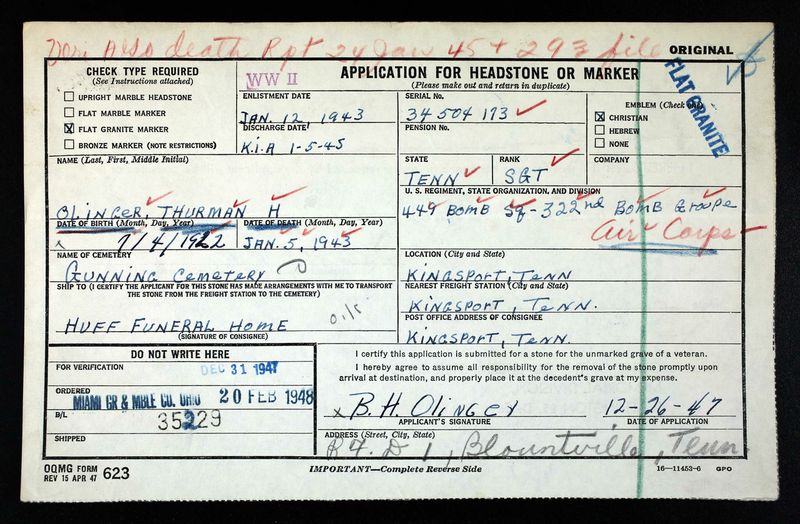