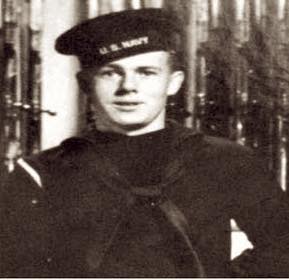 Everett enlisted in US Naval Reserve 1943; served as a Water Tender 3rd Class aboard the cruiser USS Indianapolis CA-35. After delivering the components for the atomic bomb to Tinian Island, his ship was torpedoed and sunk July 30, 1945. He was among 880 crewmen that were lost at sea.

His brother Junior Leo Thorpe was killed in action on 16 November 1944.

He had just completed the most secretive operation the US Navy performed in the Pacific, delivering the Atomic Bomb, “Little Boy”, to Tinian Island to be dropped on Hiroshima, helping end WWII.  He had been awarded three Battle Stars for action against enemy forces at Saipan Guam and the Okinawa, where his ship was damaged. This damage caused the USS Indianapolis to return to the United States, and refitting and repairs to damage in June/July 1945. His last glimpse of this great Country was Mare Island and the sight of his ship, the mighty Indianapolis, sailing under the Golden Gate Bridge at night, shrouded in secrecy, speeding across the vast Pacific Ocean. After delivering the “Special Package”, the USS Indianapolis headed towards the South China Sea. His watch was over and the summer heat had him up on the deck with several other shipmates. He returned to his work area to check on his crew. The first torpedo struck the Indianapolis and he raced to his battle station. The ship immediately began to list and he did his duty. He gave his life after getting his crew topside. He himself covered in burns from broken steam pipes after a second Japanese torpedo explored against his ship. His shipmates said the last they saw of him this was him sliding overboard, unable to grab on to safety, and him sliding into the black abyss of the Philippine Sea.
–Submitted by Randy Bullen