Staff Sergeant Thomas W. Gilley #34520467 US Army was assigned to the 262nd Infantry Regiment, 66th Infantry Division. The 66th arrived in France in December 1944 and relieved the 94th Infantry Divsion in containing the Germans in St-Nazaire and Lorient. It had been decided to keep the Germans bottled up in these Coastal Ports, instead of suffering heavy losses that had already been experienced. Using a combination of artillery and agressive patrols, both ports remained surrounded till Germany’s surrender.

SSgt Gilley was killed in action on 20th of February 1945. He is interred in the Brittany American Cemetery, L,11,22, St James, France. 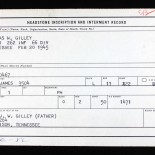