The HMT (Her Majesties Transport) Rohna was a British troop ship. On 26 november 1943, it was hit by a guided bomb shot from a German airplane, off Djidjelli, Algeria. The ship sank within one-half our after being hit. Bomb damage, supplemented by heavy seas and darkness which hampered rescue work, resulted in a loss of 1,015 men, more than half of the total 1,981 American military personnel aboard. 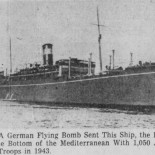 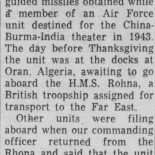