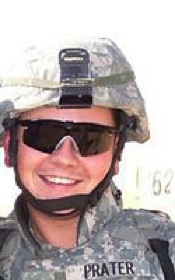 Staff Sgt. Terry William Prater, age 25, of Speedwell, TN, was born on August 13, 1981, in Kentucky and died March 15, 2007, Baghdad Governorate, Iraq. At the time of his death, Staff Sergeant Prater’s brother was stationed in Afghanistan where he was serving with the 82nd Airborne Division.

PRESTONBURG, Ky. –An Army sergeant killed in Iraq last week was remembered by his father as a dedicated soldier who loved to fish.

Prater grew up in eastern Kentucky before moving with his mother to Tennessee during high school, said his father, Terry D. Prater of Floyd County. Terry W. Prater received the Silver Star for jumping on another soldier to protect him from a grenade about three years ago in 2004, his father said. He was injured in the attack and received a Purple Heart. However, he returned to Iraq after recovering from several injuries, including losing part of his jaw bone and having shrapnel embedded in various places on his body.

“I didnt like it at all, but he said he had a job to do. He was dedicated,” Terry D. Prater said.

The soldier is survived by his wife, Amy Prater of Speedwell, Tenn., a son, 5, and daughter, 1. Terry D. Prater said his son wanted to become a teacher but planned to wait until his wife obtained a nursing degree. He said he last saw his son while visiting in Fort Hood, Texas, about five months ago. “He loved fishing more than anybody I’ve ever seen, and also hunted deer and turkey,” Terry D. Prater said. Before his death, Prater told his wife he wanted to be cremated. A memorial service will be held in Tennessee on Sunday.

“Retired soldier says slain former comrade saved his life in Iraq by the The Associated Press”
SPEEDWELL, Tenn. The widow of slain Army Staff Sgt. Terry William Prater spread his cremated remains on a lake that was a favorite fishing hole before he was deployed to Iraq. Their two young children, his brother on leave from serving in Afghanistan, and a retired Army sergeant who said Prater saved his life in combat attended the midday memorial service March 26.

Prater, 25, was killed March 15 when a roadside bomb exploded in eastern Baghdad. Retired Sgt. Tim Ngo flew from Minnesota to stand on a boat ramp with Prater’s friends and family members. “Each and every day I live will be in honor of him,” Ngo said. “l live each day, each minute, as if it’s the first time.” A military honor guard saluted Prater before the family launched a flotilla of about 10 boats for a ceremony to spread his ashes across Norris Lake. Prater’s wife, Amy, scattered his remains from a donated bass boat like the one he had dreamed of buying and using on the lake.

“I couldn’t live with myself to not come,” Ngo said. “But there’s nothing you can really say to ease the pain.” Prater was on his second deployment with the 1st Squadron, 8th Cavalry Regiment, 2nd Brigade Combat Team, 1st Cavalry Division. He received a Silver Star and a Purple Heart in his first tour for saving Ngo’s life in 2004. Prater used his body to shield Ngo, whose skull had been shattered, from a grenade in a series of explosions in Baghdad on Aug. 4, 2004, the retired soldier said. “The last grenade landed on the other side of me, and he covered me up,” Ngo said. “He took the blast.”

Prater is also survived by two children, 5-year-old Bryson and 2-year-old Madisen. The Army allowed Prater’s brother, who is stationed in Afghanistan with the 82nd Airborne Division, to return home for the services. Representatives of the Army, the Claiborne County Sheriff’s Office, the Claiborne County Rescue Squad, the Tennessee Wildlife Resources Agency, the Tennessee National Guard and other agencies attended the service.

Silver Star Citation:
“The President of the United States of America, authorized by Act of Congress July 9, 1918 (amended by an act of July 25, 1963) takes pleasure in presenting the Silver Star to Sergeant Terry William Prater, United States Army, for conspicuous gallantry and intrepidity in action while serving as Team Leader for RED Platoon, Company C, 1st Battalion, 153rd Infantry Regiment, Task Force 1-9 Cavalry, 1st Cavalry Division, during combat operations in support of Operation Iraqi FREEDOM, on 5 August 2004 in Iraq. Sergeant Prater’s courage, dedication to mission accomplishment, and outstanding performance during Operation Iraqi FREEDOM is in keeping with the finest traditions of the military service and reflects great credit upon himself, the Headhunter Task Force, 3rd GREYWOLF Brigade, 1st Cavalry Division, the Multi-National Corps Iraq, and the United States Army.” 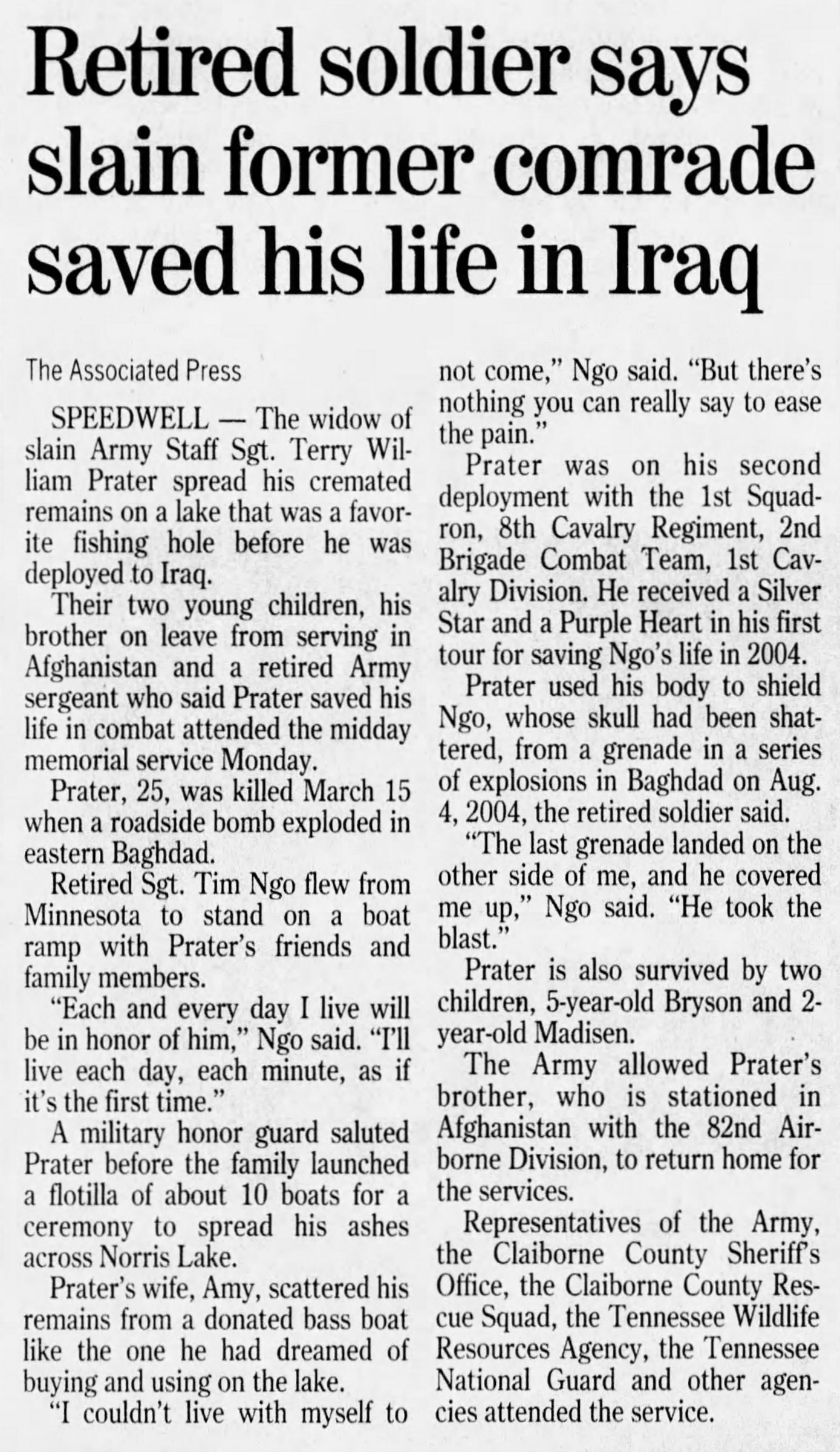 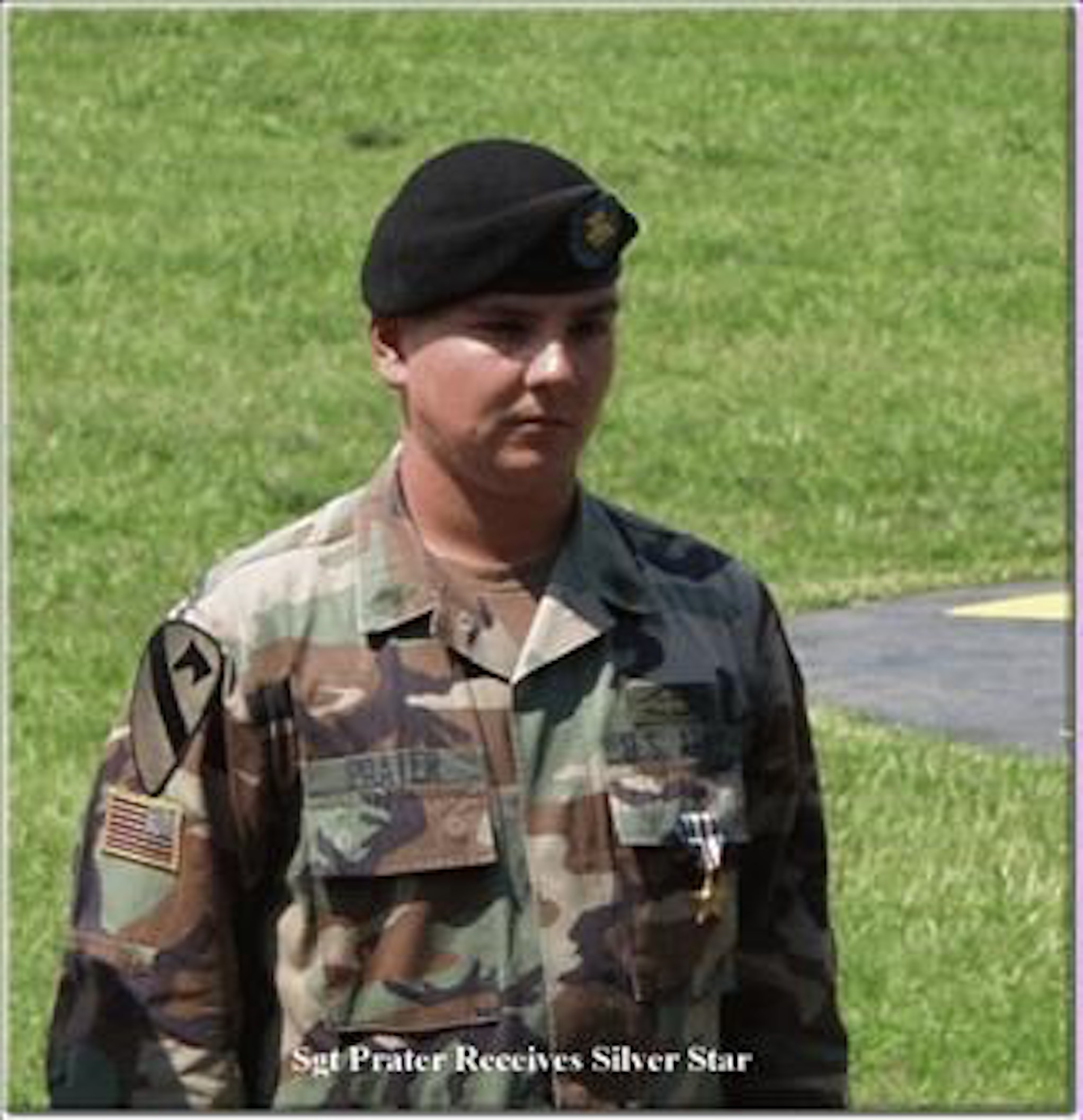