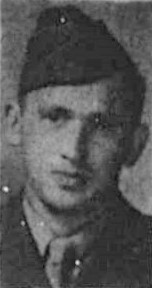 Ted McMahan was born 14 December 1919 to Berry McMahan and Miley Jane Greene. He married Henrietta Ramsey on December 6, 1942.
Died non Battle 29 January 1945. Sgt McMahan was aboard the U.S.S. Serpens. He is buried at Arlington National Cemetery in Virginia together with 249 other soldiers who returned under the WWII dead program.

The U.S.S. Serpens, while anchored off Lunga Beach, Guadalcanal, was sunk on 29 January by an explosion, due possibly to an enemy submarine attack. There were only ten survivors, An anti-submarine search was instituted immediately in the area, but with negative results. The Serpens was loaded with a large quantity of ammunition and casualties were later fixed at approximately 250.

The Knoxville Journal, March 15, 1945
Explosion of his ship cost the life of Sgt. Ted McMahan, husband of Mrs. Henrietta McMahan of Morristown, in the Pacific Ocean are on Jan. 29, according to a War Department message received by his wife recently.
Sergeant McMahan, who had been reported missing on that date, lacked one day of completion of a year’s service overseas and was stationed with a transportation unit on Guadalcanal. Formerly emloyed by Tennessee Valley Augthority, McMahan entered service in February, 1943, and took his basic trainint at Fort Oglethope, Ga. He received his transportation training at Vancouver, Wash., and was a graduate of Morristown High School.
Besides his widow and six-month-old daughter, Marianne, he is survived by his mother, Mrs. M.J. McMahan; a sister, Ruth McMahan of Morristown, another sister, Lt. Leona J. Pendley of United States Army Nurses Corps who is stationed at Fort McClellan, Ala.; two brothers, Cleon McMahan of Sevierville and Mitchell McMahan of Ula., Ky. 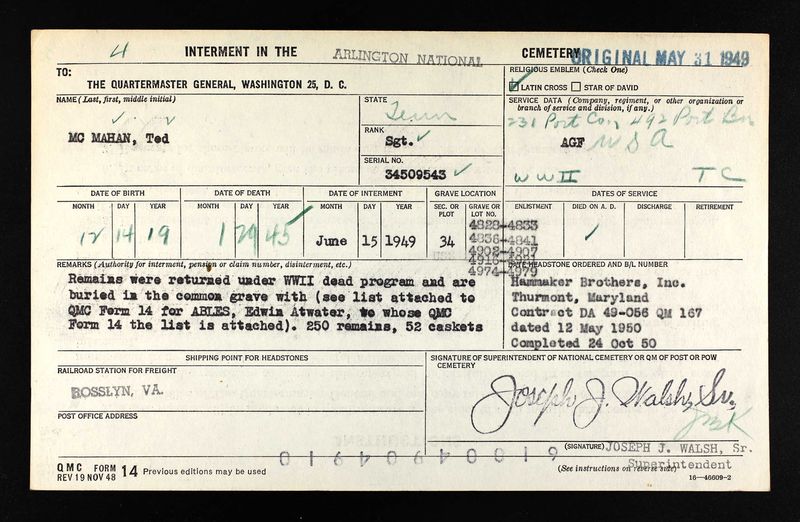