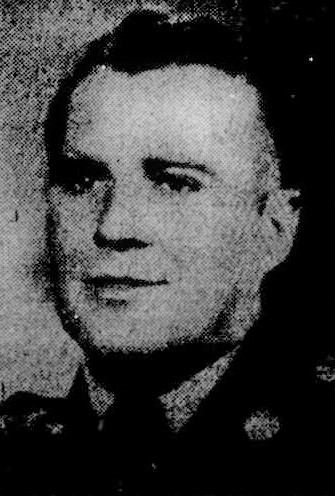 Scott County News,  December 1, 1944
We publish the following from the Somerset, Ky., Journal regarding T.Sgt. T. Harry Evans formerly lived at Robbins and is a nephew of Mr. and Mrs. Gorman Jeffers of Oneida. Technical Sergeant  Taskel Harry Evans, son of Mrs. Dock McCartt of May street, a veteran of the North African and Sicilian campaigns and a member of the forces which invaded France June 6, was killed in action in Germany, Oct. 8, according to recent word received by his mother. He had been in the Army since March, 1936, having enlisted at Fort Oglethorpe, Georgia. Volunteering for foreign service, he was sent to the Hawaiian Islands where he served until he was honorably discharged in 1938. He then joied the regular Army Reserve and was honorably discharged from that Group in March 1939, to re-enter the regular Army. After a tenure of duty at Fort Benjamin Harrison, Ind., he was sent to Fort Bragg, N.C. and then was assigned to an infantry division which was part of the invasion forces which landed in North Africa Nov. 8, 1942. His unit went in at Safi, French Morroco, and fought through the entire North African campaign and it was in this phase of battle in March, 1943, that he was awarded the Silver Star for bravery in action against the enemy. He then moved into Sicily fort hat battle at the completion of which he was sent to England and given special training with a selected Group praparatory to the invastion of the French cost. During the invasion of the Normandy beachhead, T.Sgt. Evans was wounded, was given the Purple heart and recommended for the SIlver Star. As a result of his wounds he was sent to England for hospitalization. He returned to his outfit, the American First Army, in August and fought with his buddies into Germany where he was killed Oct. 8.
He also holds ribbons for three major campaigns, the good conduct ribbon and the bar for service before Pearl Harbor. T.Sgt. Evans platoon had the honor of representing hsi division in the first military parade held on Frence soil after the invasion. Twice he was selected as a member of the Guard of Honor for King George of England. He had many friends here and was popular with both old and Young. He had a readysmile and a good word for everyone and his death on the battlefield brought a pall of gloom to many relatives and friends here. Besides his mother, he is survived by a brother, Thomas Lee Evans, S1-c, with the Navy in France; his step-father, Dock McCartt; a halfsister, Mary Nell McCartt; a halfbrother, Dock Shirley McCartt; and a grandfather, Lee Evans of Robbins, Tenn. 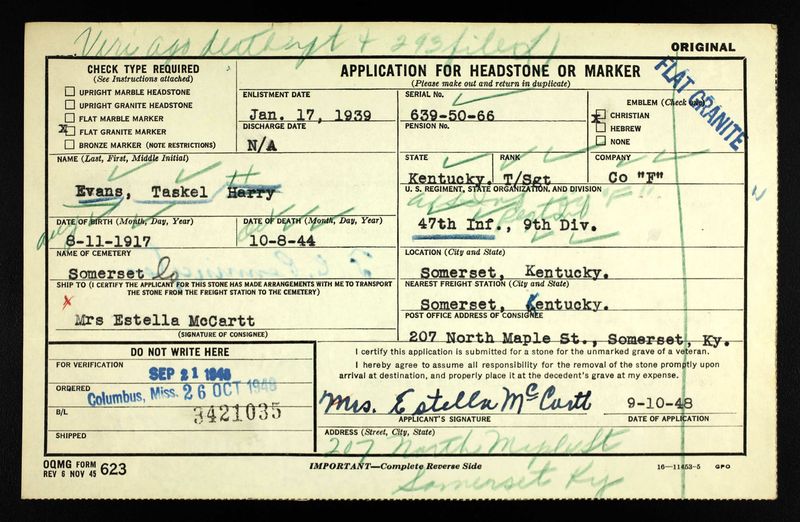