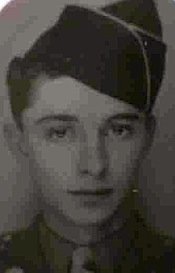 The Kingsport Times, 18 November 1947:
Funeral services for Private First Class Sylvester J. Huffman, 22, son of Mr. and Mrs W.H. Huffman of Orebank, will be held at 2 p.m. at Gardner’s Chapel with the Rev. Tom Carter in charge. PFC Huffman was killed in action October 26, 1944 in Belgium
The body will arrive in Kingsport escorted by T/5 Robert J. Vanvliet, and will be met by an honor guard of VFW members. The body will be taken to Huff Funeral Home until Thursday afternoon when it will be removed to the home of the parents in Orebank to remain until time for the funeral. Burial will be in the Gardner’s Chapel Chemetery and military funeral services will be conducted by the American Legion.
A lifelong resident of Orebank, PFC Huffman was employed at Holston Ordnance Works before entering the Army.  He enlisted in November, 1942, and served overseas with the 94th Infantry Division.
Besides the parents, survivors include three brothers, Tom and J.B. of Blountville, and Jimmie of Orebank; and five sisters, Mrs. Mary Qualls, Kingsport, Mrs. Martha Fleenor, Blountville and Margaret, Ruth and Grace Huffman of Orebank.
Members of Hammond Post No. 3 American Legion, will serve as pallbearers.