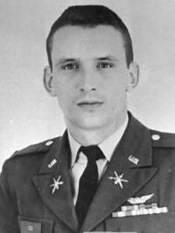 On the afternoon of 15 Jan 1969, First Lieutenant Cox and Warrant Officer Petteys were flying an AH-1G Cobra gunship on a reconnaissance mission providing air support for elements of the 4th Infantry Division, Army of the Republic of Vietnam. 1LT Cox was the aircraft commander and leader of the aerial weapons team and WO Petteys was the pilot/gunner of the aircraft. At approximately 4:20 pm, after hours of concentrated search, the aero-scout elements reported a number of heavily used trails leading to a reinforced bunker complex. After receiving clearance and firing into the position, the aero-scouts radioed that they were receiving a heavy volume of enemy automatic weapons fire. Without hesitation, 1LT Cox and WO Petteys drew the enemy’s fire to themselves and away from the vulnerable scout helicopters by diving their aircraft at the source of the ground fire and engaging the position with rockets and minigun fire. Their aircraft sustained disabling hits, which prohibited recovery from its last dive. Even then, they continued to saturate the enemy bunker area with minigun fire until their helicopter exploded in flames and plunged to the ground. Both men died instantly upon impact.