Private Stephen V. Gibson was the son of Isaac and Katherine Gibson and the brother of William B. Gibson, Vesta J. Gibson, Agusta G. Gibson, and John Gibson. He served in the European Theater of the war in the 30th Infantry Regiment, 3rd Infantry Division. He was killed in action on June 4, 1944, and is buried at the Sicily-Rome American Cemetery in Nettuno, Italy (Plot G, Row 9, Grave 25). 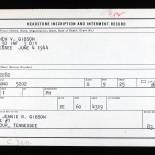