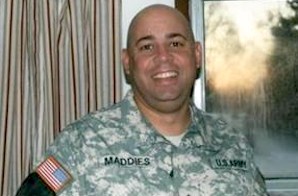 Staff Sergeant. Stephen Roosevelt Maddies of Elizabethton, Tennessee, was the son of Roosevelt and Sharon Maddies and attended Catskill Elementary, then Carnegie Junior High and graduated from Carson High School. He also attended Victory Faith Center Church in Wilmington, Calif. His family and friends were close to his heart, and he was full of life, love and humor. Stephen made loyal friends wherever he went, and he loved Tennessee, his adopted state. He was a true Tennessee Volunteer in every way. Stephen was a veteran of 20 years in the military with a distinguished career that spanned 15 years of active duty in the United States Army and five years with the Tennessee National Guard. His Army career included two tours in Korea, one tour in Kuwait with the 82nd Airborne during the Gulf War, as well as tours in Bosnia and Honduras. His first tour in Iraq in 2004 was with the Bristol Tennessee National Guard F-Troop, 278th Armored Calvary regiment. Sgt. Maddies volunteered to return to Iraq for a second tour with the 473rd unit. He earned his Master Parachutist Wings while serving with the 82nd Airborne at Fort Bragg, N.C., and was a decorated war hero. He was preceded in death by his father, Roosevelt Maddies. He was serving his second tour in Iraq when he was killed just 18 days from coming home. He was 41 and a member of the Army National Guard, 473rd Counter Rocket Artillery and Mortar Platoon, Columbia, Tennessee.

He is buried at Riverside National Cemetery, Riverside, California.

On April 15, 2008 Tennessee Governor Phil Bredesen signed a bill from the Tennessee Legislature honoring the memory of Staff Sergeant Stephen R. Maddies of Elizabethton with a memorial bridge located on State Route 840 in Wilson County, Tennessee. State Route 840 was designated in the Public Acts of 2005 as the Tennessee National Guard Parkway and has several intersections and bridges dedicated to the memory of fallen Tennessee National Guardsmen. The Stephen R. Maddies Memorial Bridge was dedicated July 11, 2008 and is located at Franklin Road in Wilson County.