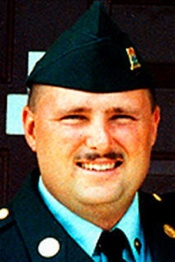 Stephen Curtis Kennedy
He is buried at Tennessee State Veterans Cemetery, Section K Site 4953
The Lenoir City Armory in Loudon County, where he trained and trained others in the 278th, now bears the name of Sgt. 1st Class Stephen Kennedy.

The Oak Ridge National Guardsman killed Monday in a fierce firefight in Iraq was remembered as a loving family man and son by grieving family members on Wednesday, his 36th birthday. Staff Sgt. Stephen Curtis Kennedy was the father of four children. He died during a four-hour battle after an ambush by insurgents hiding in ditches and canals south of Balad Ruz. “I want people to remember my husband loved his job, he loved his country, and he loved his family,’ his widow, Tiffany Kennedy, said Wednesday.

Sgt. Kennedy was a member of Lenoir City’s Company D, 1st Squadron, of the 278th Regimental Combat Team. He was the second member of the 278th killed in Iraq and the first Anderson County resident to die in Operation Iraqi Freedom. “He felt that going over there and doing what he was doing was right because it was for his family and it was for his country,’ Tiffany Kennedy said during a press conference on the carport of the family’s modest home in the Scarboro community. Earlier Wednesday, she and family members added a birthday balloon and other decorations atop the weather-beaten yellow ribbon that already adorned the family’s mailbox. “He felt it was his obligation to do what he did,’ Tiffany Kennedy said as she struggled against tears. “I cannot be prouder of anybody that I’ve met in my whole life. Whether he had this job or not, he was a hero to his kids. He was a very loving, strong, dependable, reliable person. Everybody he met, he touched their lives in some way.’

Tiffany Kennedy said she last spoke with her husband by phone Sunday, and they communicated daily by e-mail, phone or instant messenger. Their conversations centered on their children and life in Oak Ridge, she said. “We never discussed anything he was doing,’ she said. “He loved his children,’ she said. “This is the hardest on them. They all understand what happened.’ Sgt. Kennedy was the father of three sons, ages 15, 12 and 10, and a 3-year-old daughter.

Tiffany Kennedy said she learned of her husband’s death Monday when a military chaplain arrived at her door. “About the only words that went through my mind at that time were, ‘Oh God, why Stephen?’ That was pretty much it.’

“He was the consummate soldier,’ Bob Kennedy of Rockledge, Fla., said of his son. “He loved the military.’ Retired after 28 years in the Navy, Bob Kennedy said his Oak Ridge son was the second of three children.

Sgt. Kennedy joined the U.S. Marines in 1988 just after he graduated from high school in Bremerton, Wash. During a four-year stint in the Marines, he participated in Operations Desert Shield and Desert Storm. He joined the National Guard in 1998 and had been serving since then in the Lenoir City unit. Just over a year ago, he was assigned as a full-time military clerk at the National Guard Armory in Lenoir City. He departed for Iraq in November.

“He loved children, and he was always laughing,’ Bob Kennedy said of his son. “He loved to have fun.”
By Bob Fowler, Knoxville News Sentinel, April 7, 2005

On May 19, 2006 Tennessee Governor Phil Bredesen signed a bill from the Tennessee Legislature honoring the memory of Sergeant First Class Stephen Kennedy of Oak Ridge with a memorial bridge located on State Route 840 in Rutherford County, Tennessee. State Route 840 was designated in the Public Acts of 2005 as the Tennessee National Guard Parkway and has several intersections and bridges dedicated to the memory of fallen Tennessee National Guardsmen. The Sergeant First Class Stephen Kennedy Memorial Bridge was dedicated September 28, 2007 and is located on State Road 840 at the East Fork of Stones River in Rutherford county.