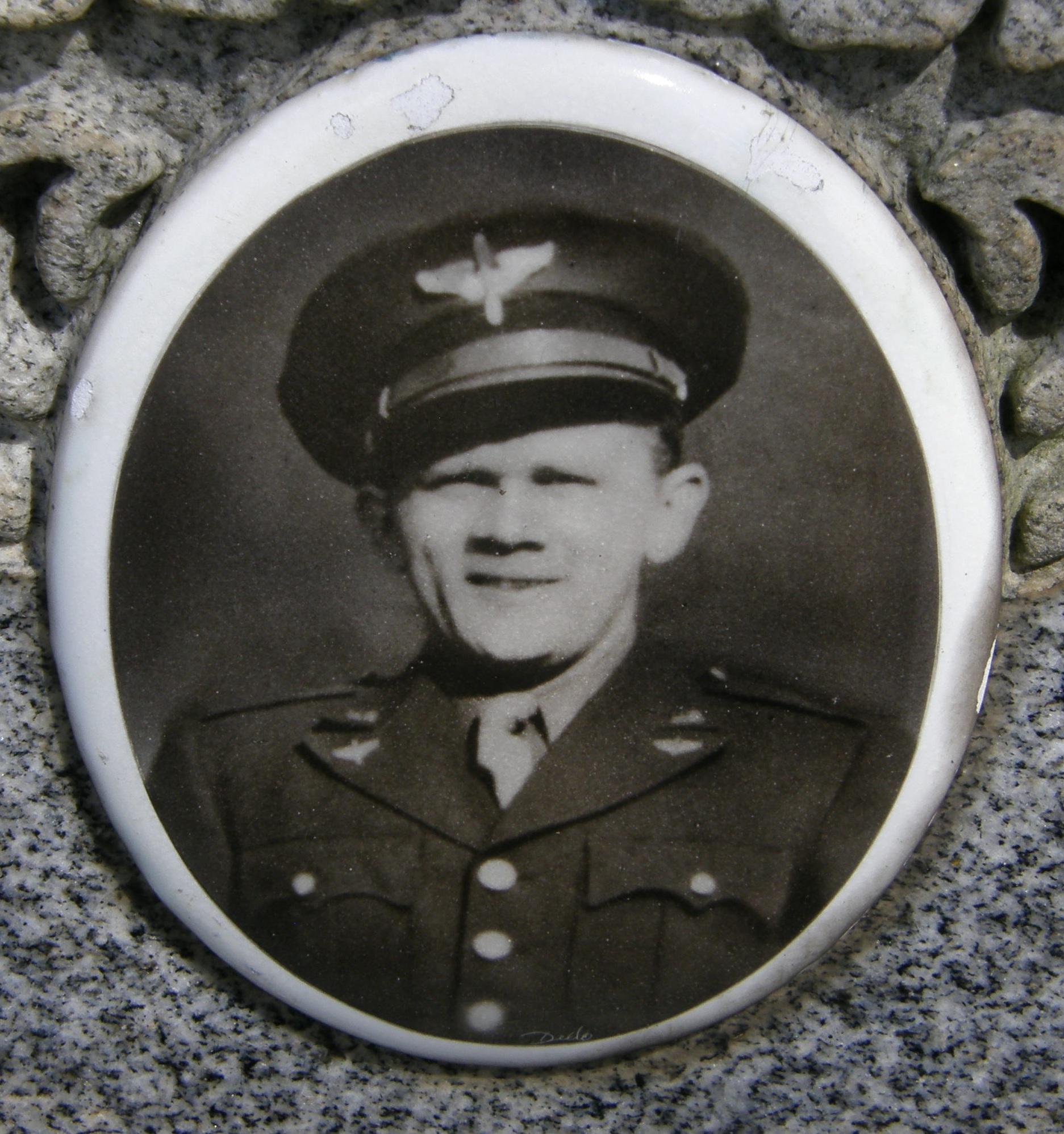 On 2 November 1944, aircraft B-17G, serial number 44-6571 departed from Rattlesden on a bombing mission to Merseburg, Germany. This aircraft was struck by aircraft 44-6511. Aircraft 511 was flying to the right and above Lt Moses. The aircraft lost one engine and pulled over to get out of formation, going to peel off to the left. Lt Moses came up at the same time and collided. #1 and #2 props caught Lt Moses- ship aft of radio room and broke his aircraft in half. The two pieces spun in immediately and no chutes were observed. Aircraft 511 was able to crash land on A-93 with no crew injuries

The aircraft crashed 1 Km South of Nimmelage near Quakenbrueck, Germany. Sherril Davis was identified by HQ Airbase and initially buried at the cemetery Quakenbrueck, grave Nr. 85.

Of the 9 crewmembers only Sgt Robert Bobby Humphreys survived. He was captured and sent to Dulag Luft West.

The Kingsport News, 7 April 1945.
Lt S.A. Davis, of Rogersville, Killed In Action. Mr. and Mrs. Walter Davis of Church Hill were advised by the War Department Monday that their son, Second Lieutenant Sherrill A. Davis, was killed in action over Germany, November 2. Lieutenant Davis was reported missing in action November 2 when his plane and another collided in mid-air over a German target. The officer, a former employe of Tennessee Eastman Corporation was commissioned at the San Marcos Air Base, Texas. He was among several Tennesseans who graduated from the aerial navigators school, a course of 18 weeks. He entered the service three years ago and went overseas September 2, landing on foreign soil September 21. Surviving Lieutenant Davis are his parents: three brothers, John Davis, Gene Davis and Dallas Davis of Church Hill: three sister, Mrs. John A. Wallace and Mrs. Elmer Brown of Church Hill and Mrs. J.D. Johnson of Surgoinsville and two brother, J.T. Davis and Leo Davis of Kingsport. Mr. And Mrs. Davis received their son’s Air Medal posthumously Monday.

Rogersville Review, April 19, 1945
Mr. and Mrs. Walter Davis of Churchh Hill were advised by the War Department that their son, Lt. Sherrill A. Davis, was killed in action over Germany November 2nd. Lt. Davis was reported missing in action November 2, when his plane and another collided in midair over a German target. The fortress had sustained damage and in attempting to peel off from the formation it collided with Davis fortress which was ascending at the same time. After Lt. Davis’ airplane was seen to fall, the other plane was brought to earth in a crash landing without injury to its crew. The officer, a former employe of Tennessee Eastman Corporation was commissioned at San Marcos Air Base, Texas. He was among several Tennesseans who graduated from the aerial navigators school, a course of 18 weeks. 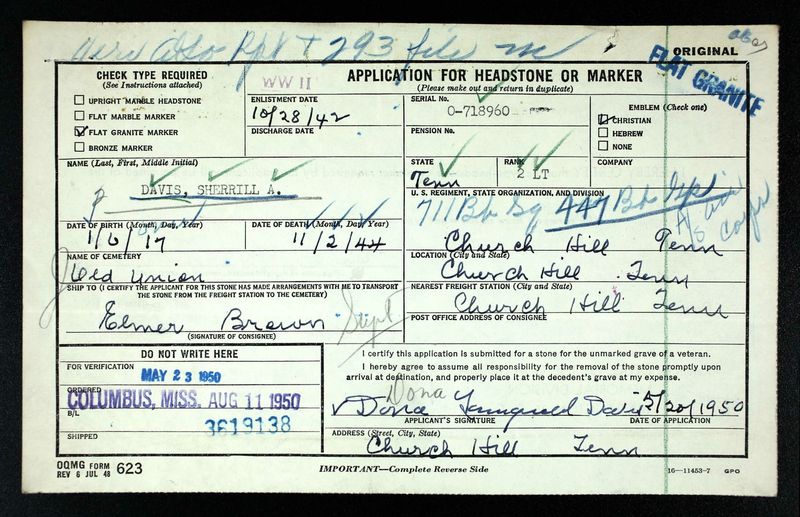 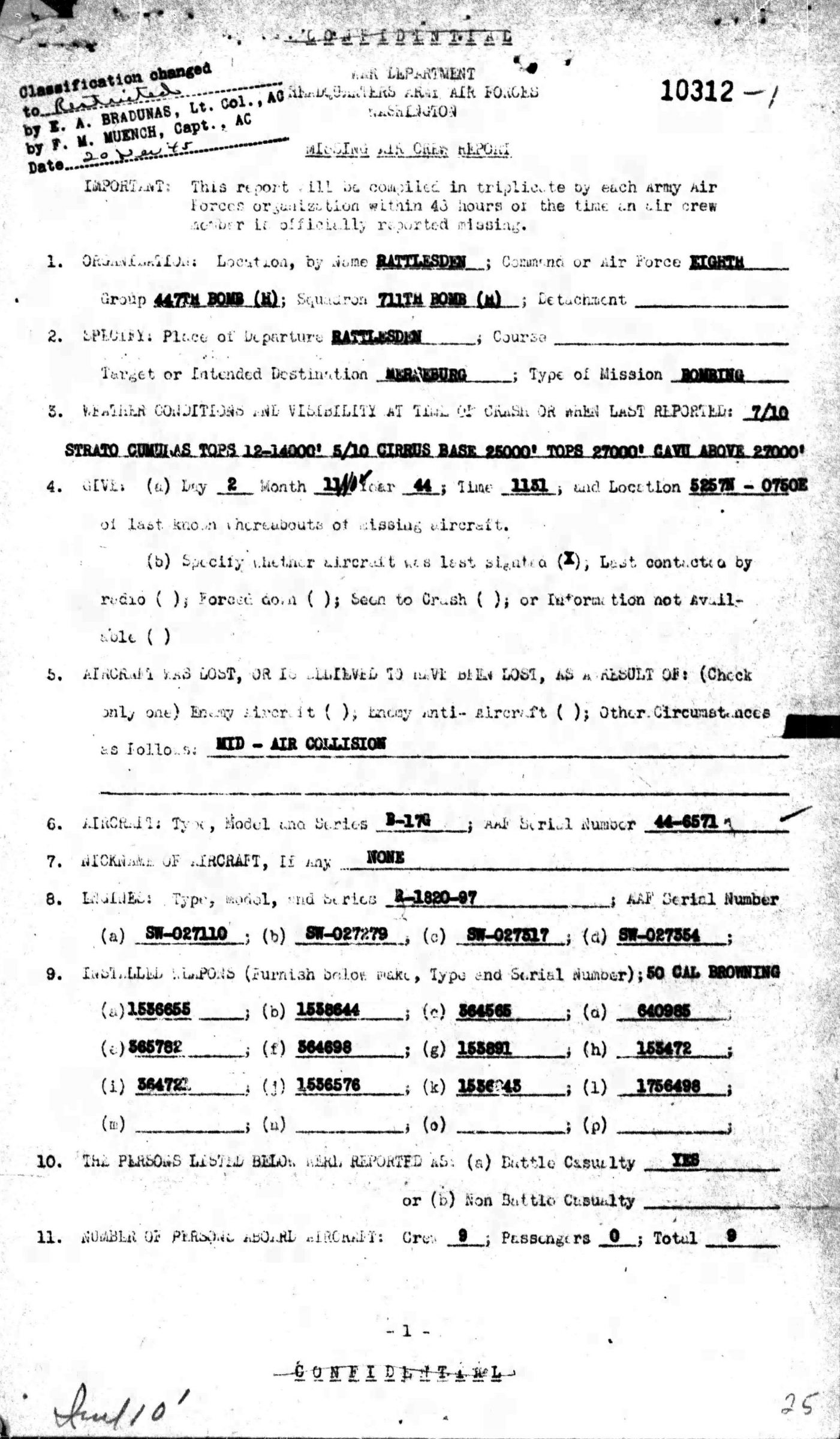 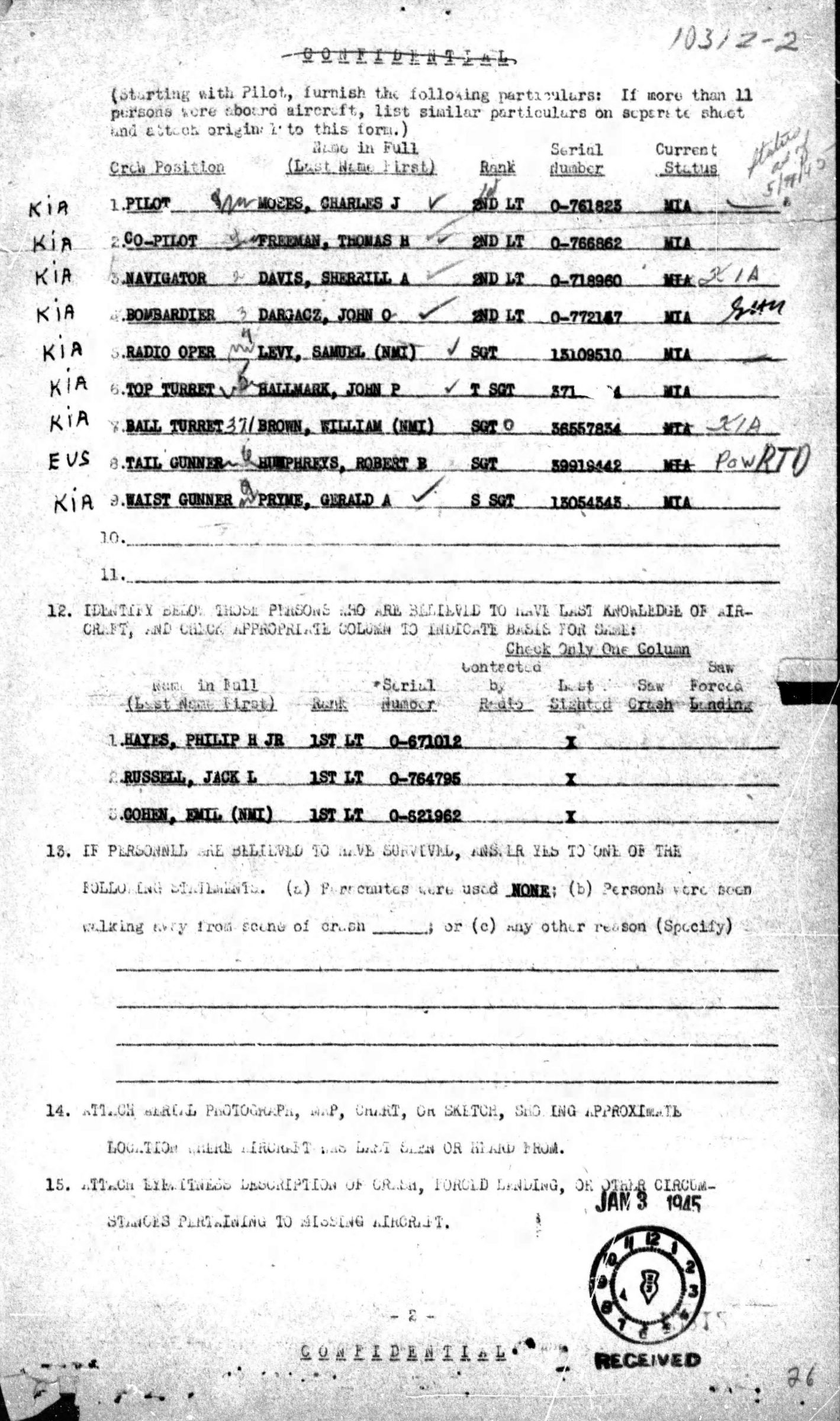