First Lieutenant Edward J. Schultz was a member of the Minnesota Air National Guard who transferred to the Tennessee Air National Guard at McGhee Tyson in 1960 to fly the F-104. Lt. Schultz had been a university student in Minnesota, but he transferred to the University of Tennessee in 1960. Between the fall of 1960 and November 1961, he became fully qualified in the F-104 at McGhee Tyson, was mobilized in 1961, and deployed with the unit to Ramstein Air Base, Germany for the Berlin Crisis. 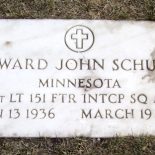