Private Samuel Newton Yearout, Jr. was born on October 3, 1897 in Blount County, Tennessee. He was the son of Samuel Newton Yearout and Ammie Jones and the step-son of Lena Seaton Yearout. He had two brothers, David J. Yearout and Evan J. Yearout, and three half-sisters, Harriet Isabell Yearout Pastove, Mae Bell Yearout Anderson, and Esther Yearout Langford. As a teenager and young man, Private Yearout worked on his father’s farm in Blount County. He married Isabel Brown in Anderson County, Tennessee on August 23, 1935. Private Yearout had one daughter Laura Carol Yearout. Prior to joining the military, Private Yearout and Isabel Brown divorced and he moved out to Southern California, as did his parents and many of his siblings. Private Yearout worked as a taxi driver or chauffeur in Los Angeles and Ventura, California. He enlisted in the military on October 17, 1942 in Galva, Illinois. He served in the European/Mediterranean theater of the war with Battery D, 403rd Anti-Aircraft Artillery Gun Battalion, Fifth Army. He was killed in action in Northern Italy on November 24, 1944. Private Yearout’s death was reported in the “Boys in Service” column in the Maryville Enterprise on December 7, 1944. An excerpt reads, “Miss Florence E. Coulter had a message from her aunt, Mrs. S. N. Yearout that her cousin, Pvt. Samuel Newton Yearout, Jr., of Ventura, Calif., had been killed in Northern Italy on Nov. 24, 1944. His Chaplain wrote and said he was killed trying to save one of his buddies. He also said Newton was well liked by all his battery. On Sunday, Nov. 26 his funeral was held using the service of the Episcopal Church, burial was in an American cemetery. He was the son of Mr. Sam. N. Yearout, who left here several years ago to make his home in California.” Private Yearout was posthumously awarded the Bronze Star for his courageous efforts to rescue a fellow soldier. He was originally buried in an American cemetery in Italy, but his remains were returned to the United States and arrived in Knoxville on June 7, 1949. He is buried in Magnolia Cemetery in Maryville, Tennessee. His obituary was printed in the Maryville Enterprise on June 9, 1949. It reads, “YEAROUT – Pfc. Samuel Newton, Jr., son of the late Sam N. Yearout, Sr. of Ventura, California, age 47 years. Pfc. Yearout was killed while serving with Battery D 403 AAA Gun Battalion Fifth Army in North Africa, on Fifth Army in Italy. The body arrived in Knoxville on June 7 and was removed to McCammon-Ammons Funeral Home. He joined the Army on October 17, 1942 and went overseas April 30, 1943, and was killed in North Italy November 24, 1944. He left the place of comparative safety to five aid to a wounded comrade, and was hit by shrapnel fragments. He was buried in an American Cemetery in Italy. The Bronze Star and the Purple Heart were awarded him posthumously. His Chaplain wrote his father that “Yearout was well liked by all his battery, that he had been a good soldier and a son to be proud of.” The Chaplain telling of Yearout’s aid to a wounded comrade which led to his death, quoted from the Bible, “Greater love hath no man”. The younger men in his outfit affectionately called Yearout “Pop”, because of the kindly interest which he took in them. Surviving are a daughter, Laura Carol Yearout of California; mother, Mrs. Sam N. Yearout, Sr. of Ventura, Calif.; two brothers, David J. Yearout of Avenal, Calif., and Evan J. Yearout, Carlsbad Caverns, New Mexico; sisters, Mrs. Harriet Pastove of Los Angeles, Calif., Mrs. Esther Langford, Mrs. Mae Belle Anderson of Ventura, Calif.; an aunt, Mrs. Margaret J. Litterer of Maryville, and many relatives in Tennessee.” 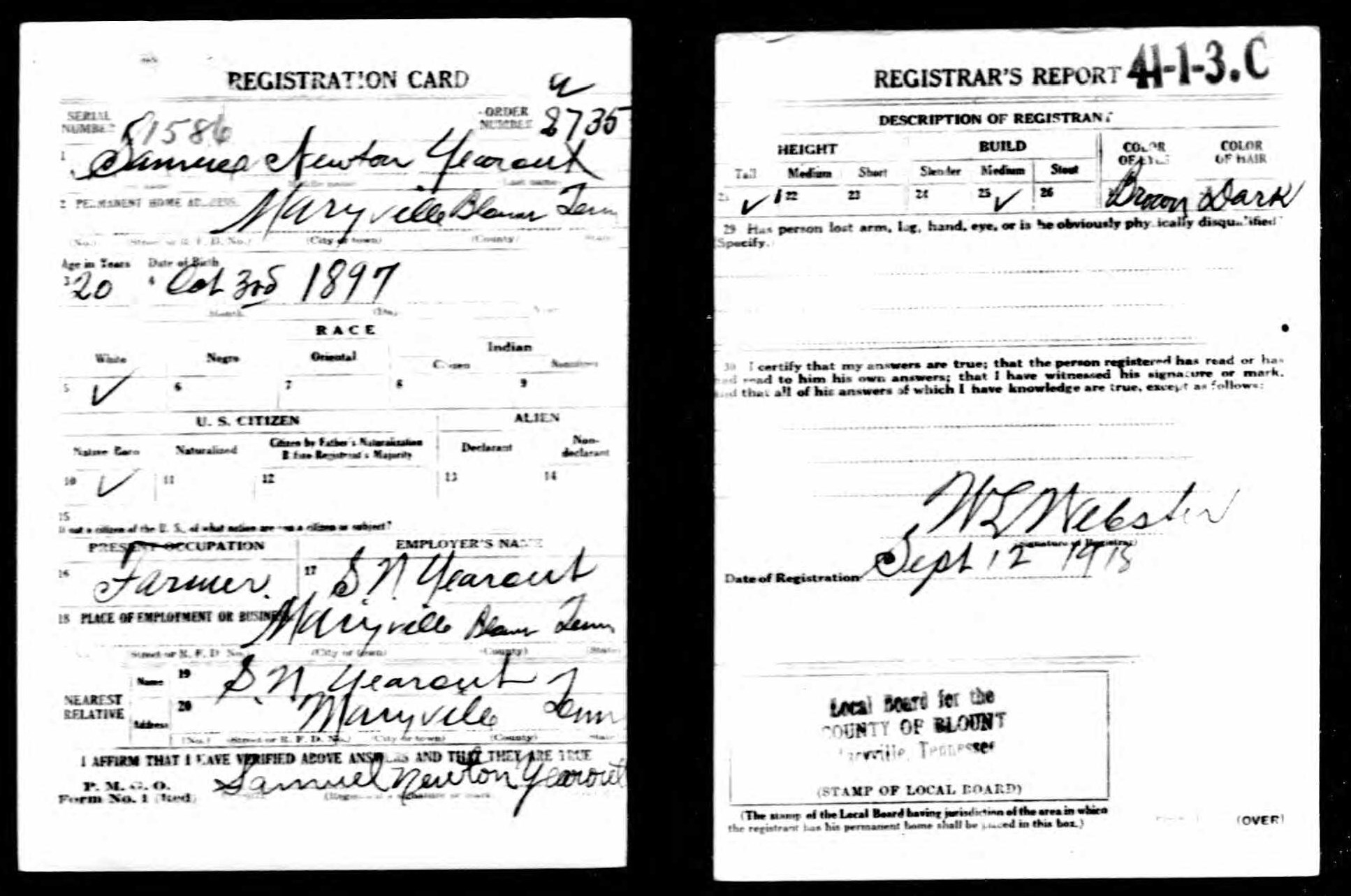 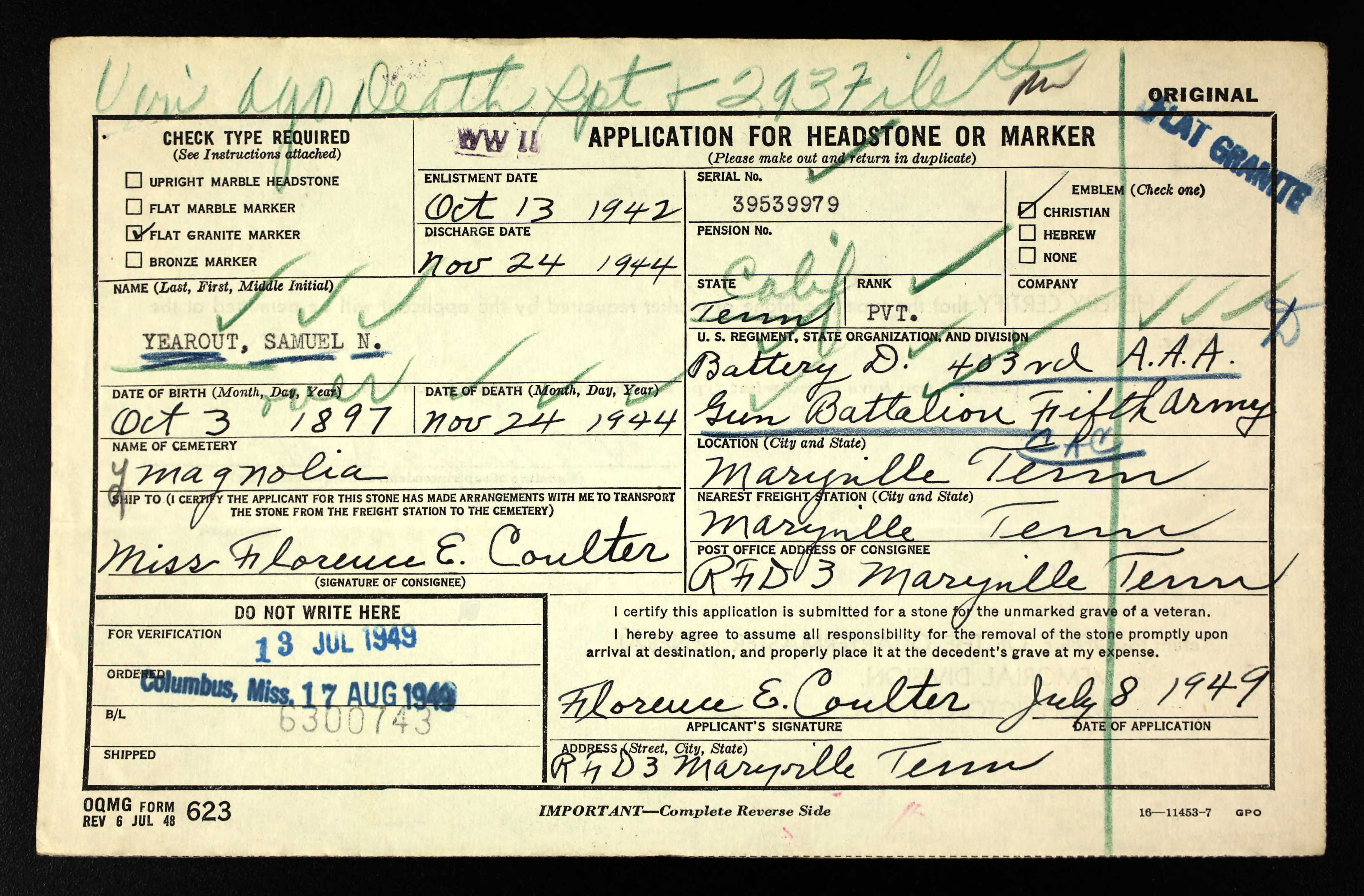