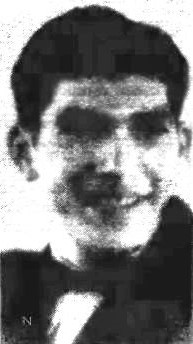 Staff Sergeant Samuel M. Fanburg, US Army Air Forces, was assigned to the 728th Bomber Squadron, 452nd Bomb Group H, flying in a B-17 out of Deopham Green, England. He was killed in action on 13th of February 1944, and is listed on the Tablets of the Missing, Cambridge American Cemetery, England.
Awards include the Purple Heart and the Air Medal.

From Airwar over Denmark, By Soren C. Flensted:
The 452nd hit the primary target at Posen, and also hit a target of opportunity at Rostock. 15 twin engine, and 10 single engine German fighters attacked the formation over the West Coast of Denmark. This plane was reported missing, but 9 to 10 chutes were seen. 4 other 452nd planes received damage. 452nd Gunner’s claimed one enemy aircraft destroyed, four probable, and three damaged.

The Formation was attacked by 4 Ju-88’s which lobbed one rocket each into the formation, then attacked with 20mm guns. Mavoureen’s #1 engine caught fire, and a big hole was observed on the leading edge of the left wing. The crew bailed out, most over the icy sea. The pilot, 2Lt Huffman, went down with the plane and crashed at the Heldagerlille, Fuglebjerg, 25 Km east of Korsor, Denmark. Lehman, Frazier, McCabe, Fanburg, and Berry landed in the sea and drowned. All are listed on the Walls of the Missing in Cambridge, England. Huffman’s Body was recovered from the B-17; no tags were found but a gold ring with the inscription B.L.H. was found on his finger. Huffman was buried in Svino Churchyard, grave 31. Thomlinson’s body was recovered 28 May 1944, washed ashore near Hyllekrog on the Island of Lolland and buried at Svino.

Brady was picked up by a boat from Lightship #4. He later died in a hospital and was buried at Korser Cemetery.

MacDonald and Smith, the Waist Gunners, were picked out of the freezing water by a German ship and ended the war in POW camps in Germany.

The Chattanooga Daily Times, 26 June 1944
S/Sgt Samuel M. Fanburg, 20, son of Mr. and Mrs. Herman H. Fanburg, 110 East Third Street, was reported missing in action while on a mission over Germany as a crew member of a Flying Fortress on Feb. 20. Although crew members of other bombers in the formation reportedly saw a number of parachutes blossom from the crippled ship, no word has been received of Fanburg since that time, according to his family. Fanburg is a graduate of Central High School, where he was a member of the school band. He volunteered in the Air Corps in 1942. 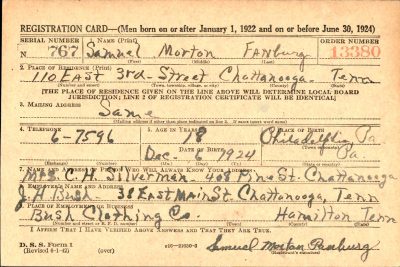 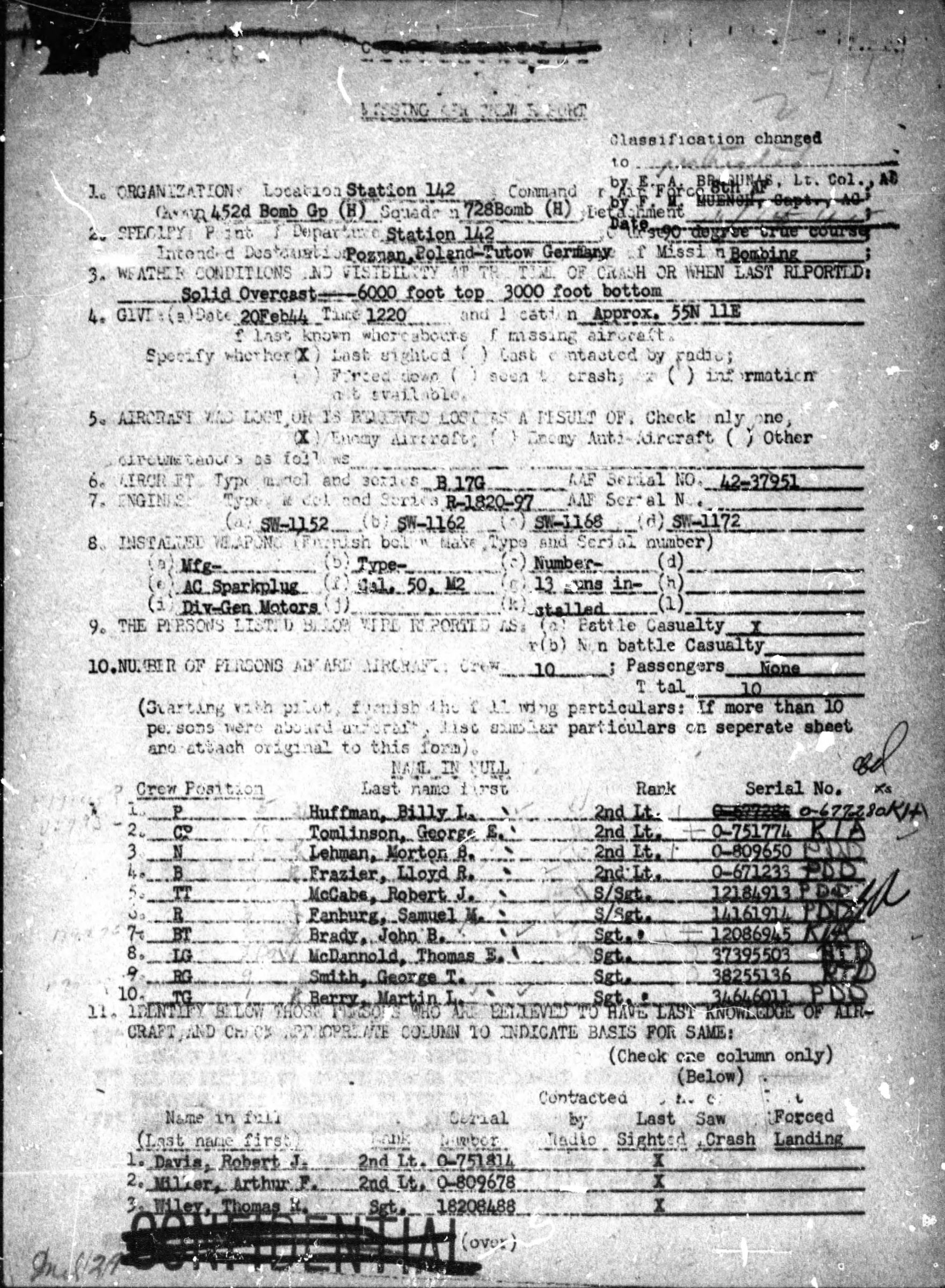 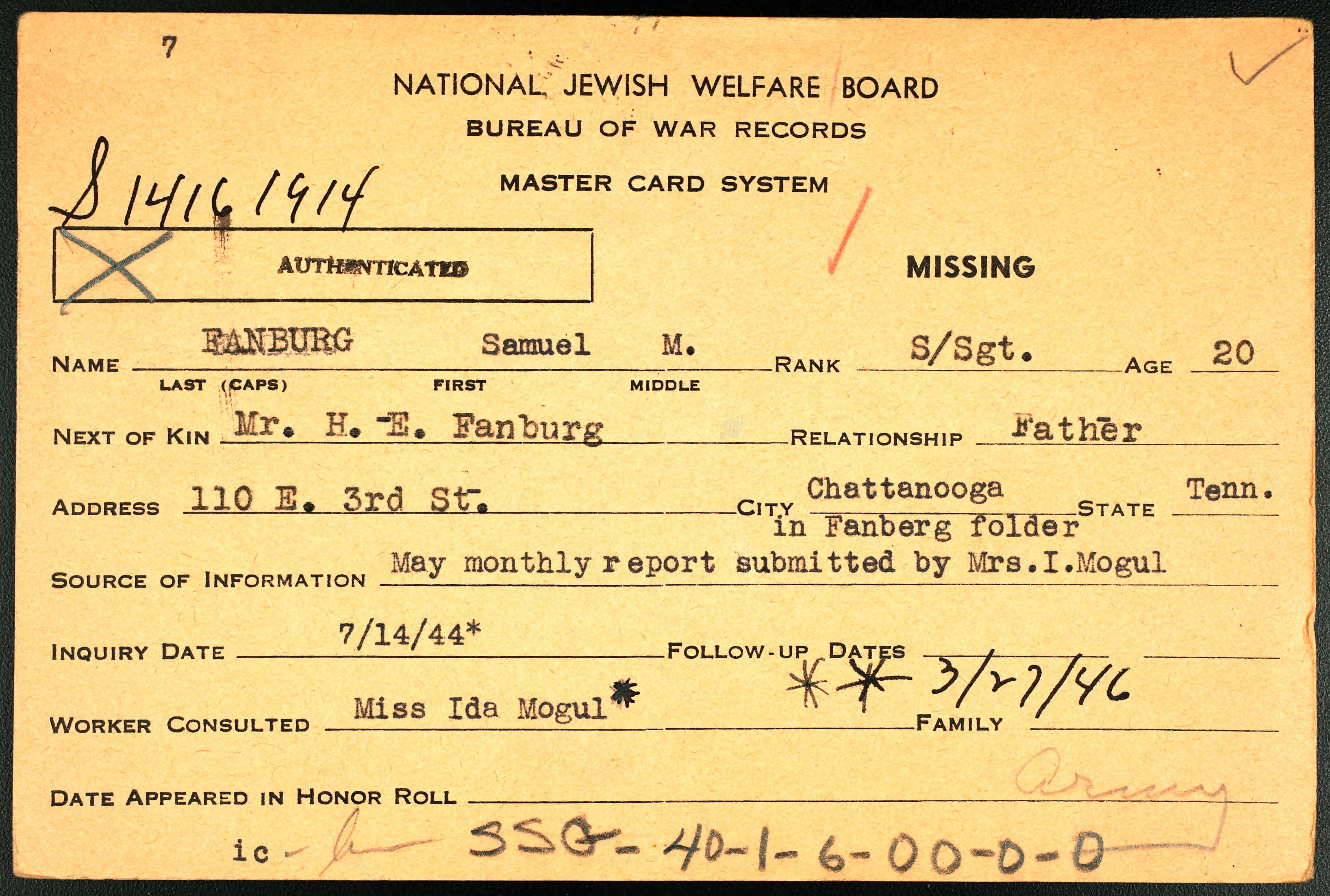 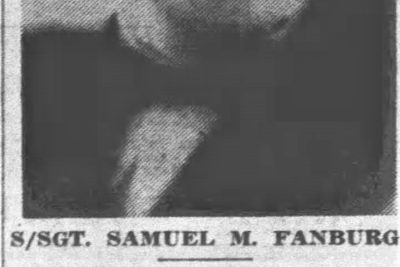