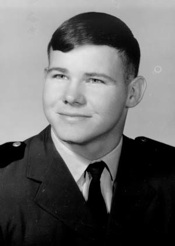 Captain James was a member of the 13th Tactical Fighter Squadron. On April 18, 1973, he was the weapons system officer on a McDonnell Douglas Phantom II Fighter (F-4E) with the task of spotting a target with a smoke rocket in Cambodia. His aircraft crashed. His remains were recovered on February 17, 1998. His name is inscribed on the Courts of the Missing at the Honolulu Memorial.