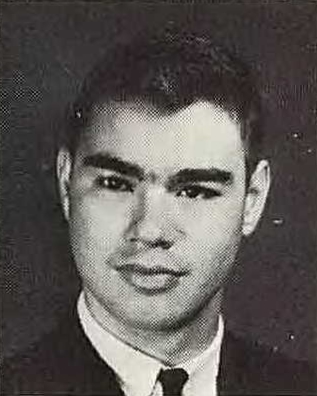 Hospital Corpsman 3rd Class Samuel Russell (Russ) McGee III was born on November 22, 1944 in Atlanta, Georgia. He graduated at the University of Tennessee Chattanooga in 1964. He served his country in the Vietnam War in the United States Navy, with H&S Company, 1st Battalion, III MAF as a Medical Corpsman. He had served in the Navy for four years prior to his tour in Vietnam. On September 6, 1967, HM3 McGee was killed while under hostile conditions in Quang Nam, South Vietnam. He was 22 at the time of his death. HM3 McGee is memorialized on the Vietnam Veterans Memorial on Panel 26E, Line 14.

He went by his middle name Russ. He was my Pi Kappa Alpha “Big Brother” when I was a pledge in fall of 1963. We were fraternity house room mates for a time. The graduation date from UT Chattanooga is wrong. He was one year ahead of me at then University of Chattanooga, which later became UTC. As I remember, Russ lost his deferment, as did I, and he was was called up because he was already in the Navy reserves. I lost my deferment in 1966 & was drafted & joined the Marine Corps on Spring of 1967. I learned about Russ’s death in the late Summer of ‘67. Russ graduated from either Baylor or McCallie Military Academy; I can’t remember which. He lived on Signal Mountain. He was. Civil War history buff, a good card player and a GREAT fraternity brother. Semper Fi & phi phi k a Russ.
–Submitted by Larry Stewart