James Russell Nichols was born on 14 January 1920 in Johnson City, Washington County, Tennessee to Robert Hudson Nichols and Frances Elmira Smart. He was stationed in North Africa in January 1943 and died in an airplane crash in Sardinia, Italy on 5 December 1943. Sgt Nichols is buried at Oak Grove Cemetery in Marion, McDowell County, North Carolina.

Marion Progress, February 10, 1944
Erwin flier killed in crash had planned to be home soon.
Erwin, Jan. 7, 1943 – Mr. And Mrs. R.H. Nichols, who were notified by the War Department December 27 that their son, Staff Sgt. James Russell Nichols, had died in Sardinia December 5, later received a letter from the department telling them their son was killed in an airplane crash “on an authorized flight”.
The message gave no further details of his death, but the parents said they believed Sergeant Nichols had started back to the States when he was killed.
Sergeant Nichols, who would have been 24 years old on January 14, had completed 50 missions over enemy territory and had been grounded for a rest. The last letter his parents received dated December 4, the day before his death, told them he was awaiting orders and furlough clearance before starting back to the States and that he expected to be home by the first of January.
A memorial service was held for him last Sunday at the Centenary Methodist Church.
As flight engineer and turret gunner on a B-25 Marauder bomber, Sergeant Nichols was a veteran of raids on Sicily, Pantelleria, Rome, Sardinia and Naples. He was credited with 180 combat hours and had won the Air medal with seven Oak Leaf Clusters.
In a recent letter to his parents, the Young flier told of the heroic deed and another Erwin airman, Sgt. Ernest English, who now is held as a prisoner of war in Germany. Sergeant Nichols was a graduate of Unicoi County High School and attended East Tennessee State College and completed a course in an airplane school in California three years before joining the Army October 20, 1941. He was graduated from an air mechanics school at Keesler Field, Biloxi, Miss., and had been in foreign service since September, 1942.
Besides his parents he is survived by a brother, Hudson Nichols, of California. He was a grandson of Mrs. Dora Nichols of Marion. 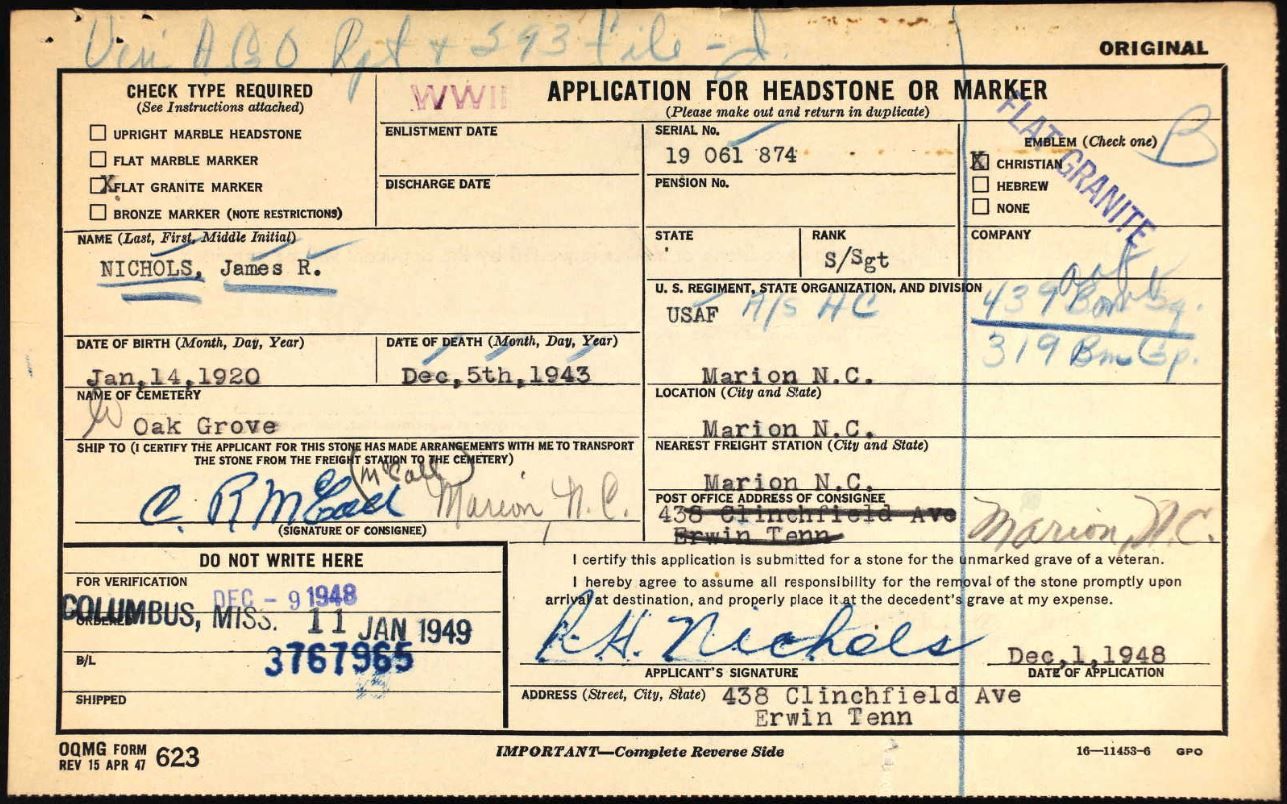 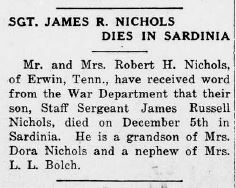 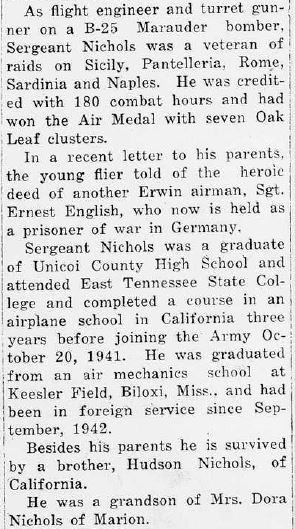