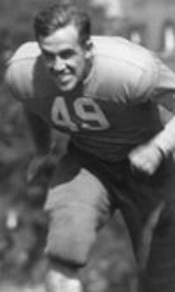 (UNCONFIRMED – Citation Needed): Rudolph F. Klarer, United States Army, is reported to have been awarded the Silver Star under the below-listed General Orders for conspicuous gallantry and intrepidity in action against the enemy while serving with the 45th Infantry Division during World War II.General Orders: Headquarters, 45th Infantry Division, General Orders No. 61 (1945)100 Days of Vols #58 – The Ultimate SacrificeBy Brad Shepard on Jul 4 2013, 8:00a The numbers you know hang up there on the inner facade of Neyland Stadium — 16, 45, 91, 92. Peyton Manning. Johnny Majors. Doug Atkins. Reggie White. Those names and numbers earned their spots as retired jerseys for the Tennessee Volunteers because of feats between the sidelines on a football field.All four of those players were true gridiron warriors and true Volunteers.But words like “warrior” and “volunteer” get thrown around casually these days, don’t they? Today, we celebrate Independence Day as a nation, and on this day, I’d like to recognize the four other names and numbers retired who embody the real meaning of those words.Bill Nowling, Rudy Klarer, Willis Tucker and Clyde Fuson are names that don’t immediately come to mind when you think of the Tennessee greats. A few years ago when we counted down the top 100 Vols of all-time on my old blog, 3rd Saturday in Blogtober, none of those guys made the list. But they’re the biggest heroes to ever wear the orange and white.Nowling (No. 32), Klarer (No. 49), Tucker (No. 61) and Fuson (No. 62) gave the ultimate sacrifice for our freedom in World War II. They died so we could be free and so we could stand out there today, eat hot dogs, have cold beverages, shoot fireworks and practice our beliefs — whatever they may be. They died for more than a petty football game. It’s easy in the South for football to be “life” and “death.” We talk about plays killing us and about the field of battle and use all these sports cliches to describe what we see on those yard lines.But a lot of us have no idea what true battle, true war, is. The ones of us who do know that a football game is just a football game.War is war. Life is life. And when you put that precious life on the line for a bunch of strangers, and you lose that life, that’s the most selfless act imaginable. Nowling, Klarer, Tucker and Fuson did that. For you. For me.There’s not a lot of information out there on the four guys. But they were real men and were one time real boys who probably believed beating Alabama was the most important thing facing them.• Nowling was a fullback from 1940-42. He died Aug. 9, 1944, one day after his 24th birthday. He was from St. Petersburg, Fla., and was a three-year starter under General Robert Neyland and John Barnhill.• Klarer was a reserve guard in 1941 before earning a starting spot his senior year. He was from Louisville, Ken., and he passed away at the age of 21, a couple months before his 22nd birthday.• Tucker was a local boy who graduated from historic Knoxville High and earned a football letter in 1940. He also starred for the track team. Tucker died at the age of 26 on Nov. 28, 1944.• Fuson was known as “Ig” and was a native of Middlesboro, Ken. He shared playing time with Nowling in 1942. His younger brother Herschel “Ug” Fuson transferred to West Point from Tennessee.Scouring the Internet, it’s difficult finding information about these men. Their legend has faded, and — while it’s a shame, it’s just the nature of the world in which we live — we don’t remember the true heroes like we remember the ones we create who star on sports fields rather than fields of battle. But it’s worth your time to learn more about a few of the players who played for the Vols and gave their lives. From one of my favorite authors — Rick Bragg’s — collection of news stories Somebody Told Me, there’s this excerpt on Nowling:The class scattered in the years after graduation — to junior college, business and trade schools, work. Many of them started families.The Japanese bombing of Pearl Harbor on Dec. 7, 1941, disrupted their plans and split families that were just getting started. Some men were drafted. Some volunteered. Some were left behind.Bill Nowling had started at fullback every game of his last three years at the University of Tennessee and played in two Sugar Bowls.After graduation, he was commissioned an infantry second lieutenant at Fort Benning, Ga., in June 1943, and married his high school sweetheart in July.He was killed in August 1944, leading his platoon in fighting in France.“Bill was a hero before he went to war,” Emerson said.“He seemed indestructible,” Bob Miller said.We are all mortal, no matter how some of those players look on the football field. We will all die someday, unless as some of us believe, we’re here when Jesus returns. These are only four names of men who died so that we can be free. They gave their lives leading strangers who became brothers, fighting other men their age in some faraway land.They may be mortal, but their names and numbers will forever be immortalized as long as there is a University of Tennessee and a football stadium in which to honor them. Next time you’re sitting in your seat, take a look at those names and remember what they stand for.Remember it today.Enjoy your hamburgers, hot dogs, family time, fireworks. But remember it today. And say a silent thank you, even if it’s all you do. 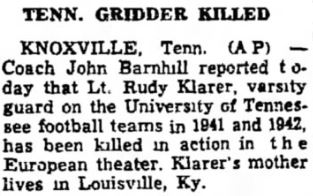 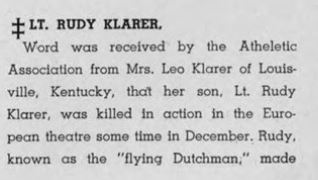 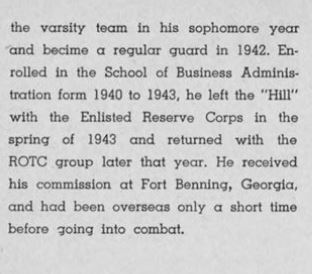