Middlesboro Daily News (Kentucky), 26 March 1945
Posthumous award. Mrs. Odell Sivils has received the Purple Heart awarded posthumously to her husband PFC Roy W. Sivils. Also the European Theatre ribbon and the Good Conduct Badge. PFC Sivils was inducted into the armed service November 5, 1942 at Fort Oglethorpe, Ga., and took infantry training at Camp Walters, Texas, Camp Van Dorn, Miss., Camp Carson, Colo., and Camp Roberts, Calif. He landed in Italy in July 1944. He was wounded in action in Italy October 3, but was returned to duty after three days and was killed in action October 29, 1944. He was first reported as Missing but later reports state he was killed.

My dear Mrs. Sivils: Your letter of 7 December 1944 concerning your husband PFC Roy W. Sivils, 34491321, formerly a member of this organization, and now reported missing in action, received this Headquarters. It is my sad duty to inform you that your husband is believed to have been killed in action, on 29 October 1944. Please understand that you have my deepest sympathy, and I am sure I am speaking for every man in this organization whose good fortune it was to have known your fine husband. PFC Silvis was, in every way, an excellent soldier and one who will be sorely missed. PFC Sivils was along with a group of American soldiers, some of whom are thought to have been killed. Your husband was listed Missing In Action because his body has not been recovered but he is thought to have been one of those killed. He will continue to be listed as Missing In Action as long as his body is not recovered. It might be comforting to you to know that, if your husband was killed, he did not suffer. Death came to him instantly and calmly.
Sincerely
Wayne W. Patrick 1st Lt,
133rd Infantry Commanding Co ´C´
Middlesboro

Daily News, 7 July 1949 Shawanee, Tenn., July 7 – Funeral services for PFC Roy W. Sivils, 22, who was killed in action in Italy, October 29, 1944, will be held at 2 p.m. Friday at Shawanee Methodist Church with Rev. Londy officiating. Burial will be in Crockett Cemetery, Forge Ridge. The body will arrive in Middlexboro Friday morning and will be at Cawood Funeral home until time for the service at the church.
Dewey Guy Post No. 14 of the American Legion will be in charge of the service at the grave, under the direction of Captain Roy Fraim.
He is survived by his parents, Mr. and Mrs. James C. Sivils; brothers Edward and Hoey of Harrogate and Chester of Middlesboro; and sisters, Mrs. Hazel Clyan of Harrogate and Mrs. Cleo Thompson of LaFollette.

Military Funeral
It is requested that all legionnaires meet at 1:45 p.m. Friday at the American Legion Memorial Home to take part in the military funeral of PFC Roy W. Sivils. Funeral will be held at Shawanee Methodist Church with burial at the Crockett Cemetery. 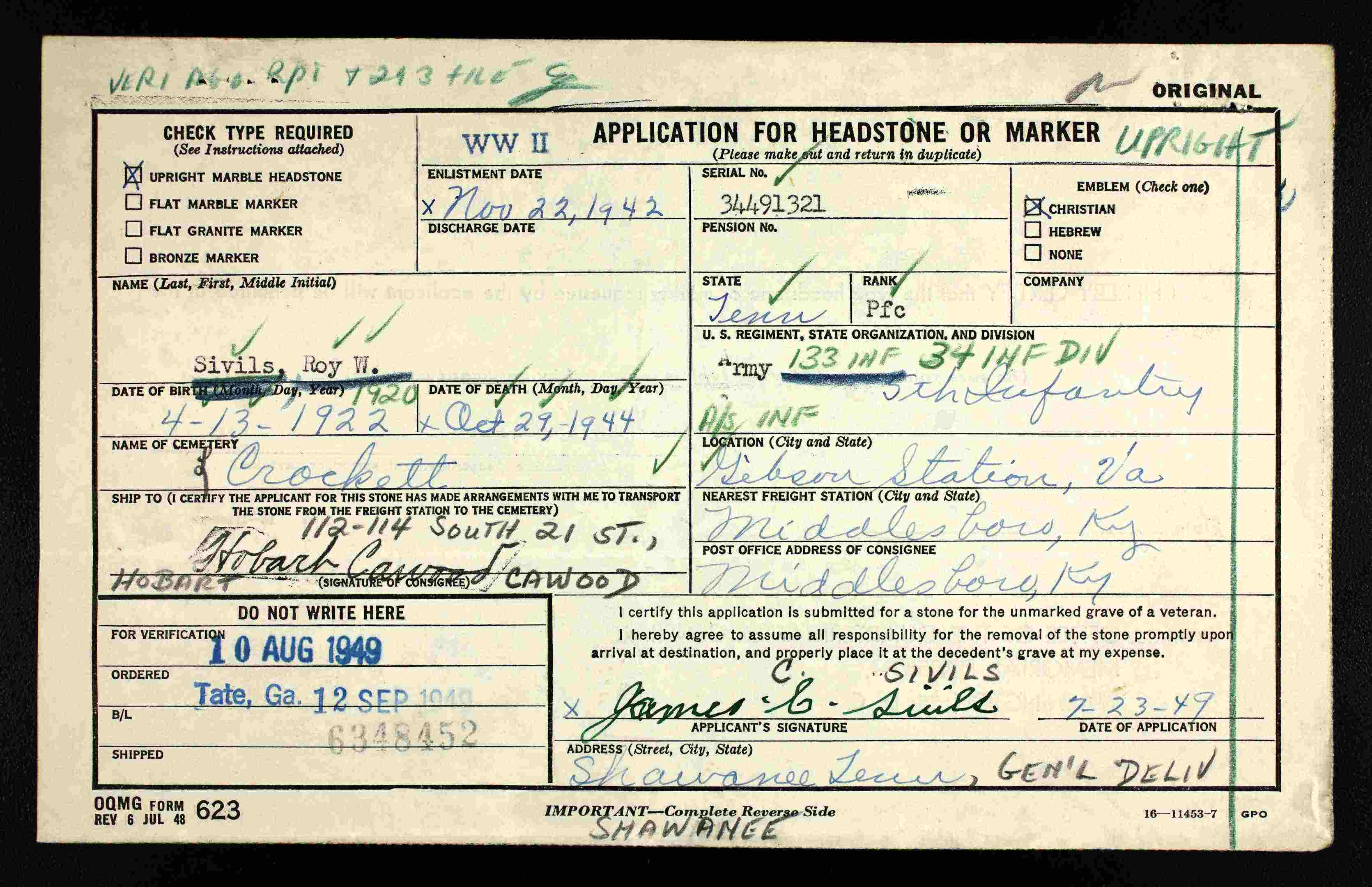