Roy Edwin Nealon was born 3 February 1912 in Cumberland County, Tennessee. His parents were William H. Nealon and Elizabeth Aytis Watson. He died in a beach landing 12 May 1944. Interment date was 9 December 1948 in Knoxville National Cemetery, Knoxville, Tennessee, Section B Site 6209.

PFC Nealon was returned from Carano, Italy. He was awarded the Purple Heart

Crossville Chronicle, July 20, 1944
W.H. Nealon of Crab Orchard, Route 1, was notified by the War Department on June 14, 1944 that his son, Pfc. Roy E. Nealon, age 32 years, was killed in action on May 12, 1944. Roy was a hard working Young man and preferred sawmill work as his choice. He was employed by J.J. Castleman for about six years before going into the Army on May 12, 1942.
In addition to his father, surviving are a sister and four brothers: Mrs. Ellac Potter of Crossville, Rt. 2; Walter E. Nealon of Eugene, Oregon; Rev. Lonzo C. Nealonf of Paris, Tenn., Ira E. and Theodore of Crab Orchard, Route 1. Also one halfbrother, William Arthur Nealon, Dayton, Ohio and a host of relatives and friends. He was loved by all who knew him. 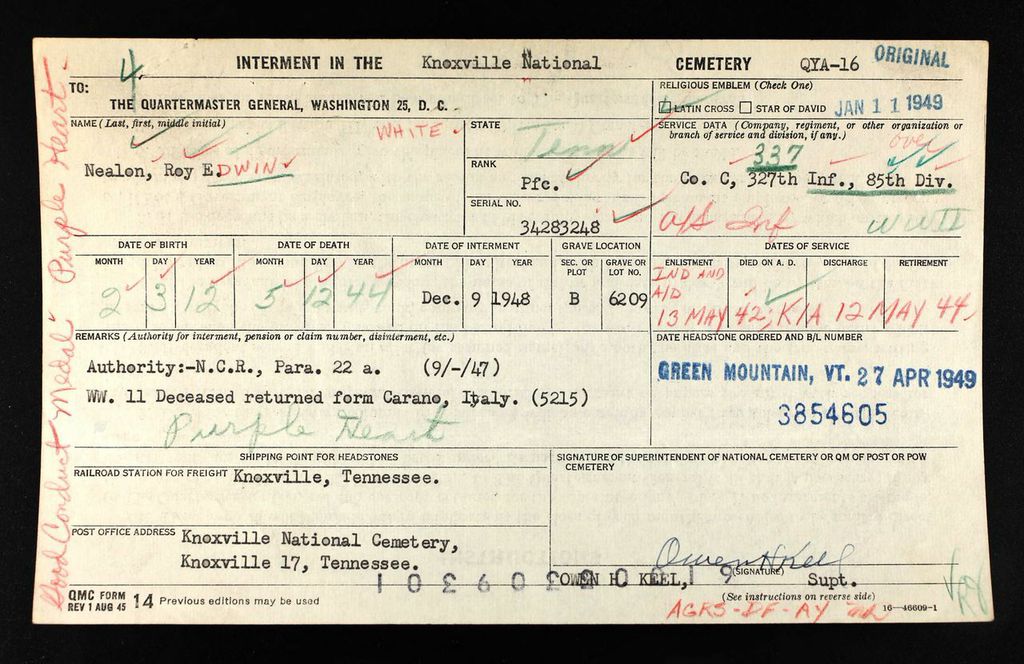