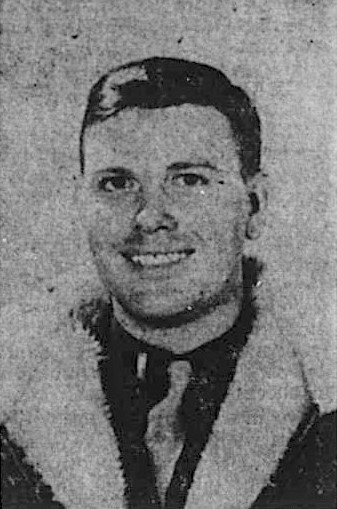 Crossville Chronicle, February 15, 1945
First Lieutenant Roscoe C. Brown was killed in action in England on December 27, according to the telegram received from the War Department, by his widow, Mrs. Vivian Brown, at Gainesboro, on Saturday, January 16th.
Lt. Brown volunteered for service with the Air Forces, on Aug. 22, 1942, receiving his basic training at San Antonio, Texas, Pine Bluff in Arkansas and Independence in Kansas. He finished his flight training and received his “Wings” and was commissioned as a second lieutenant at Ellington Field in Texas January 7, 1944. His combat training was taken at Peterson Field, Colo. He was stationed at Lincoln, Nebr. for several weeks before being assigned to overseas duty July 1, 1944. When he was promoted to First Lieutenant he was a pilot on a B24 bomber, serving with the U.S. Eighth Army Air Force in England, and had completed more than 10 missions over enemy territory in Europe. Lt. Brown was married to Miss Vivian Poston, daughter of Mr. and Mrs. J.C. Poston of Gainesboro, May, 1935. She has resided with her parents since her husband enlisted in the service. Prior to enlisting, Lt. Brown was employed by Stone and Webster contractors of Chattanooga.
He attended Cumberland County High School, Crossville, when he moved here in 1930 with his parents from Jackson Coutny. Besides his widow he is survived by his parents, Mr. and Mrs. J.A. Brown of Crossville and a sister, Mrs. J.R. Dodson of McMinville.

Crossville Chronicle, September 6, 1945
Air Medal Reword.
My Dear Mrs. Borwn: With greatest regret I have learned of the death of your husband, First Lt. Roscoe C. Brown, which occured while he was in action on Dec. 27, 1944 in England. Word has come to me concerning the fine traits of character possessed by Lt. Brown, among which were dependability, and willingnessto accept responsibility. After graduating as a pilot at Ellington Field with an outstanding record, he proved to be an able officer earning the confidence of superiors by his diligent and efficiënt execution of the most difficult assignments; associates remember him as an able leader and loyal comrade. I hope pride in your husband’s courageous and valuable contribution to our cause will relieve your sorrow. My heartfelt sympathy is extended to you and other members of the family. Very sincerely, H.H. Arnold, Commanding General, Army Air Forces

Dear Mrs. Brown,
I have the honor to inform you that, by direction of the President, The Air Medal and one Oak Leaf Cluster, representing an addition award of the same decoration, have been posthumously awarded to your husband, First Lieutenant Roscoe C. Brown, Air Corps. The citation is as follows:
Air Medal and one Oak Leaf Cluster for meritorious achievement ina ccomplishing with distinction, several aerial operation missions over enemy occupied Continental Europe. The courage, coolness and skill displayed by this individual in the face of determined opposition, materially aided in the successful completion of these missions. His actions reflect great credit upon himself and the armed forces of the United States. 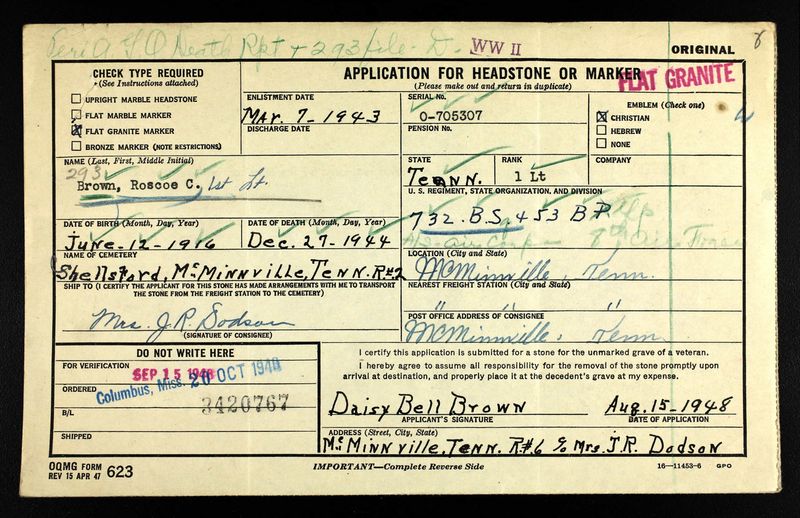