Corporal Ronald Lee Wright was born on December 22, 1948, and was originally from Chattanooga, Tennessee. He served his country in the Vietnam War in the United States Marine Corps, as an antitank assaultman in 3rd CAG, Combined Action, III MAF. His tour began on July 16, 1967. On March 15, 1968, Cpl. Wright was killed in Quang Tri province, South Vietnam, under hostile conditions; he was 19 years old at the time of his death. He is memorialized on the Vietnam Veterans Memorial on Panel 44E, Line 60. 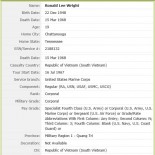