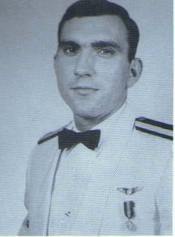 History of Flight
Prong 33, EC-47, SN 43-49100, was scheduled for a classified combat mission eminating from Phu Cat Air Base, Republic of Vietnam on 8 October, 1969. The proposed departure time was 1440 hours local time. Estimated time enroute was planned for 7 hours total flying time. The flight crew was observed arriving at the Squadron Operations building at around 1250L. The pilot discussed fuel on board and field weather with the duty officer. Flight briefing was begun at 1320L and terminated at about 1350L. Both pilots had adequate crew rest and eaten dinner the night before. In addition, both the pilot and co-pilot were know to have eaten lunch immediately prior to briefing.

Take-off from Phu Cat Air Base, Republic of Vietnam, was made at 1450L. At 1510L, Prong 33 called Prong Control on HF radio and reported returning to base because of doppler problems. The pilot landed at 1530L. After landing, the navigator informed maintenance personnel that the weather radar was also inoperative. The air crew stood by the aircraft while the doppler was repaired. They were informed that the radar had a major problem and would takd a longer period of time to repair. Pilot then went to Prong Control SOC and requested relaunch instructions stating the weather radar was out and the weather was bad. The Assistant Operations Officer told him to try to reach the fragged area but return befor dark if the weather becomes a problem.

Prong 33 was airborne on the second flight at 1635L. When proceeding to the working aira Prong 33 was called on UHF radio by another squadron aircraft at approximately ?? unreadableL. The squadron aircraft was departing an area close to Prong 33’s fragged area because of adverse weather. These weather conditions were passed on to Prong 33 and nothing abnormal was noted at this time. Prong 33 checked the fragged area and found it unworkable due to weather. The flight was passed by Pyramid control GCI to Portcall Control GCI. Pyramid lost radio contact with Prong 33 prior to completing hand-off however, Portcall was advised of the aircrafts intentions of going feet wet, then up the coast and was able ro maintain radar contact. Radio contact was established at 1851L by Portcall with Prong 33, ten minutes after hand-off by Pyramid. At 1911L. Portcall effected a hand-off to Phu Cat Approach Control.

Contact was made on the 1?0 degree radial at 42 NM of Phu Cat TACAN CH 87. Approach Control vectored Prong 33 for a GCA approach by IFFSIF and with good radio contact on UHF. Pilot asked for and received a VHF back up frequency from the Approach Controller. Normal vectoring and altitude changes were given by Phu Cat Approach Control. These vectors took weather into consideration that was observed by the pilot visually and painted by Approach Control. Prong 33 proceeded from initial contact point at 1912L to a point 20 NM from field at 1927L, at which time Prong 33 was handed off to the Arrival Controller. During this time interval the aircraft descended from 9,500 feet to 5,000 feet and at time of hand-off to Arrival Control, 1927, Prong 33 was given and acknowledged a descent from 5,000 feet to 3,400 feet. The pilot never reported level at 3,400 feet.

Due to the poor weather and low ceilings in the area where Prong 33 was last observed, airborne search efforts were limited. Army ground teams did some search in the general area the aircraft was suspected to be lost. On the first day of reasonable weather, 12 October 1969, the aircraft was located by a Jolly Green Helicopter search effort. Location of Prong 33 was fixed at 1345L, 12 October at the 158 degree radial at 16.2 NM from Phu Cat TACAN.

On 8 October 1969, Staff Sergeants Elmore L. Hall and Michael L. Stiglich, assigned to Detachment 1, 6994th Security Squadron, were reported MIA while on a tactical mission their status was subsequently changed to killed at the time of the incident as the result of non-hostile circumstances. The pilot of the EC-47, tail number 43-49100, reported an inflight emergency caused by a fire aboard the aircraft and declared that they were returning to Phu Cat Air Base. Shortly thereafter, radio and radar contact was lost with the aircraft. It did not land at Phu Cat Air Base and the members were declared missing at the time of estimated fuel exhaustion. The wreckage was located 15 miles southeast of Phu Cat Air Base and evidence of death was received on 14 October 1969.

“Ron was a very nice guy. It was a pleasure to know him.”
-Dennis Headrick