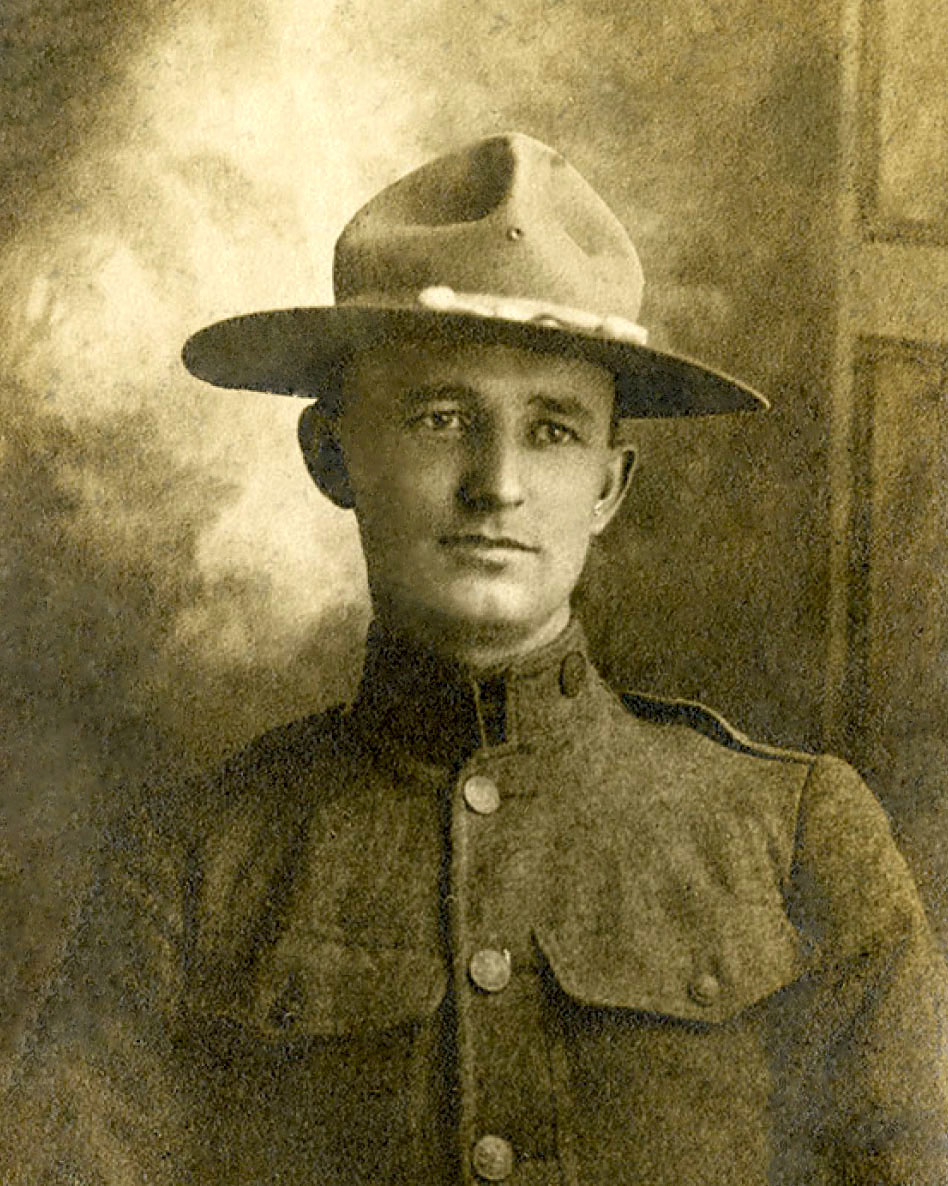 Roby was born on 27 September 1897 in Bristol, Washington County, Tennessee. He moved with his family to Johnson City, Washington County, Tennessee at an early age. Roby enlisted in the Tennessee Army National Guard in Knoxville, Tennessee on 23 August 1917 and stated his date of birth as 27 September 1897 making him 19 years and 11 months old. In fact, he was only 16 and 11 months of age. Roby knew the National Guard units had been called into Federal Service by the President on 25 July 1917 and he didn’t want to be left behind.

Since Roby listed his home address as Johnson City he was assigned to Company G, 3rd Tennessee Infantry Regiment based at Elizabethton and sent back to Johnson City. When he got back Company G as were all the other companies in the 3rd were getting ready to deploy to Camp Sevier, Greenville, South Carolina to form the new 30th Division. The 3rd arrived Camp Sevier on 8 September 1917. There they would join units from North and South Carolina, as well as those from Tennessee to form the core of the 30th Division, later known as the Old Hickory Division in honor of General and President Andrew Jackson.

General Order No. 4 dated 12 September 1917, Headquarters 30th Division brought about a big change for Roby and the 3rd. They were reorganized into the 117th Infantry Regiment under the 59th Infantry Brigade and Roby stayed with Company G, 2nd Battalion. He took to Army life and impressed his leadership during training and was promoted to Private First Class on 19 October 1917.

Roby departed Camp Sevier on 5 May 1918 with Company G for Camp Mills, Long Island, New York to await transportation overseas. He along with others were given leave and for days afterwards and on the ship nursed sore necks from the hours they spent looking at all the tall skyscrapers of New York City. After boarding the SS Northumberland in Brooklyn, New York, they set off for Liverpool, England on 11 May and arrived on 23 May. After disembarking the ship he and the four infantry regiments of the 30th Division boarded troop trains and were taken to the port cities of Dover and Folkestone for the channel crossing over the next couple of days. He and his company arrived the port city of Calais, France on the 25th. As the 30th Division piecemealed into France just as they had done into England, they were taken to Audruicq by train and marched the short distance to the various towns and villages known as the Eperlecques Training Area in France. Roby was billeted with the 117th at Nortbecourt and began Phase “A” Training with the British 39th Division on 10 June 1918. It was during this timeframe, Roby still impressing his leadership with his own leadership abilities became a non-commissioned officer with his promotion to Corporal on 1 June 1918.

Roby and the 30th were given a breathing spell after being relieved from the Ypres-Lys Offensive on 5 September and were entrained to the St. Pol area and companies F, G & H of the 117th were billeted at Beauvois, France to resupply, do some more training and get a little rest from all the heavy artillery explosions. On the 17th the 30th Division made the move to the Puchevillers Area were they would come under the control of the 4th British Army on the 21st as would the American 27th “New York” Division to join in the Somme Offensive, also known as the One Hundred Day Offensive.

Roby was killed in action on 8 October 1918, the first assault day of the Battle of Montbrehain while engaging German Forces at Premont. He participated in two Unit Campaigns: Ypres-Lys Offensive in Belgium and the Somme Offensive in France. Roby also fought in the Battle of Bellicourt on the Hindenburg Line. He had just turned 18 years old 11 days prior and was first interred at the British Military Cemetery at Fricourt, France and later moved to the Somme American Cemetery in Bony, France and placed in Block A, Row 29, Grave 25. After his parents decided that Roby should come home, they requested he be returned to Johnson City and was interred at the Mountain Home National Cemetery, Section I, Row 15, Site 10 on 10 July 1925. 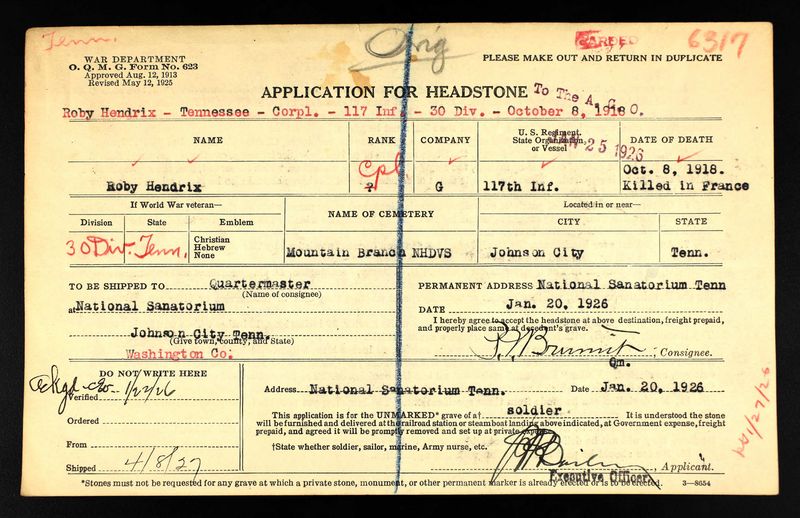 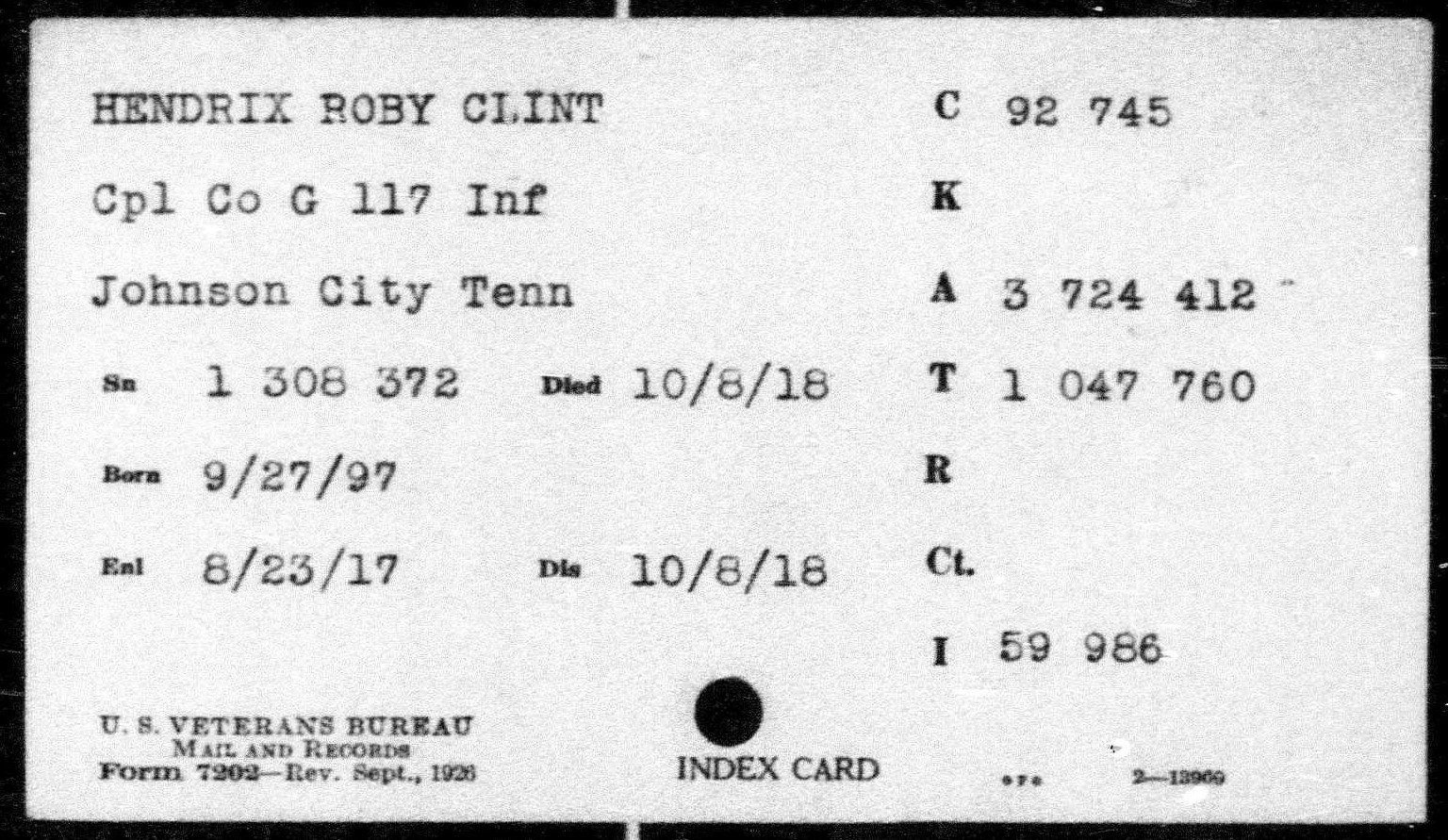 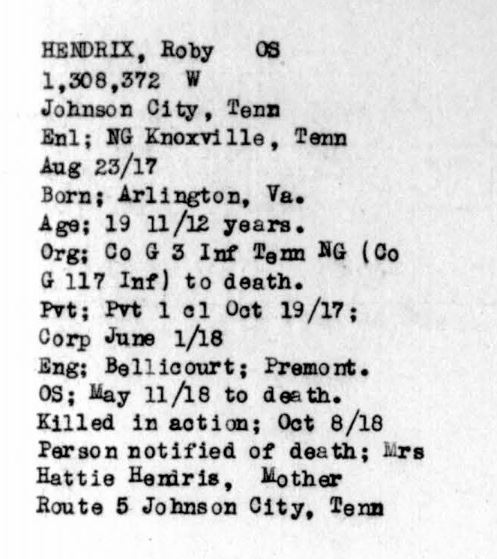 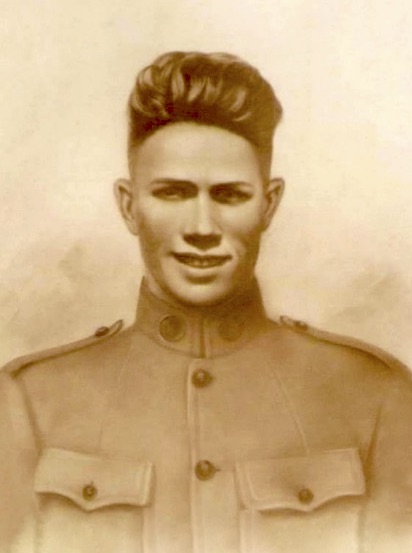 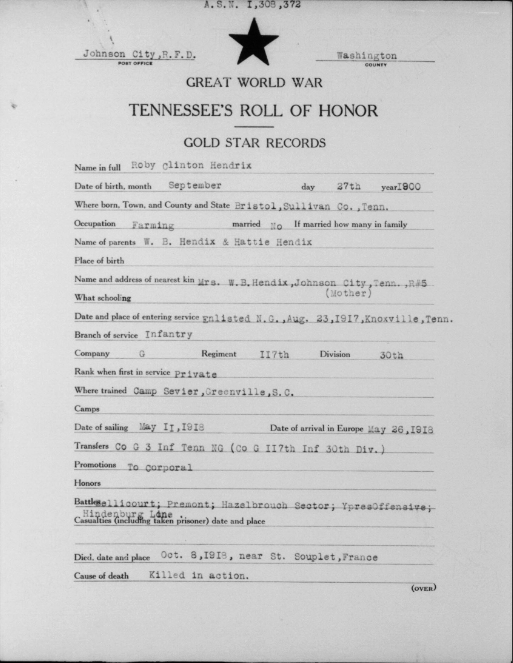 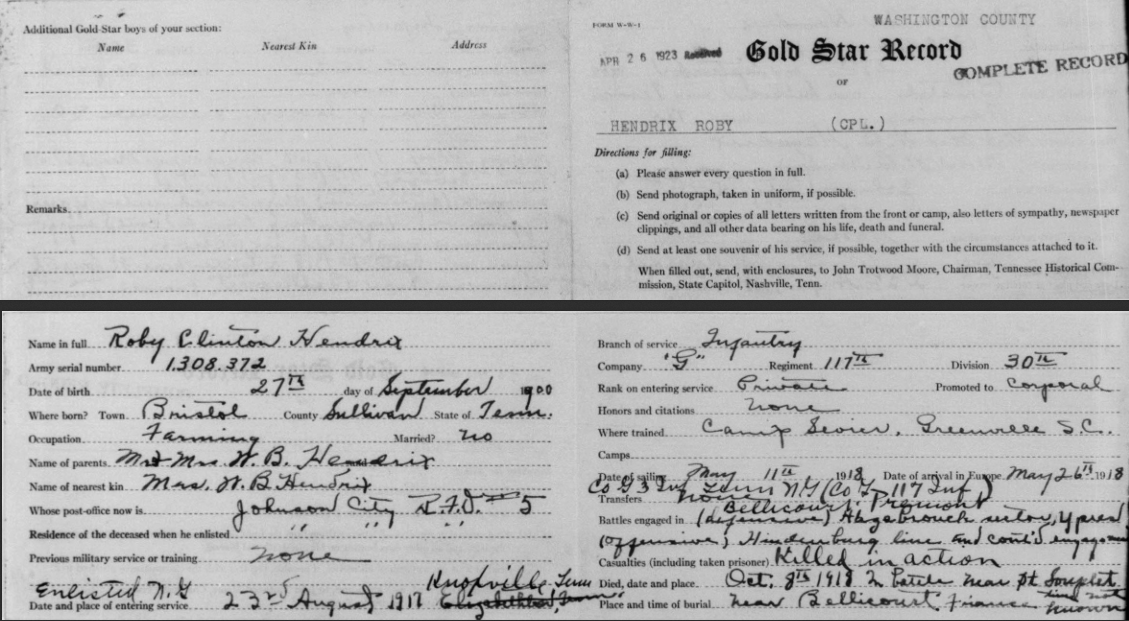 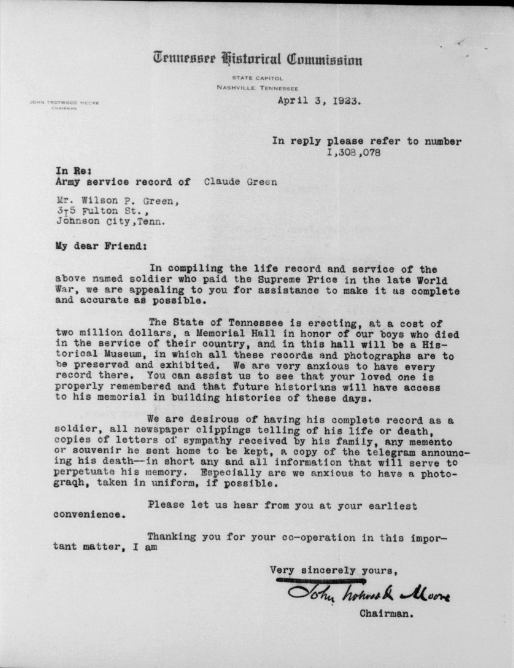 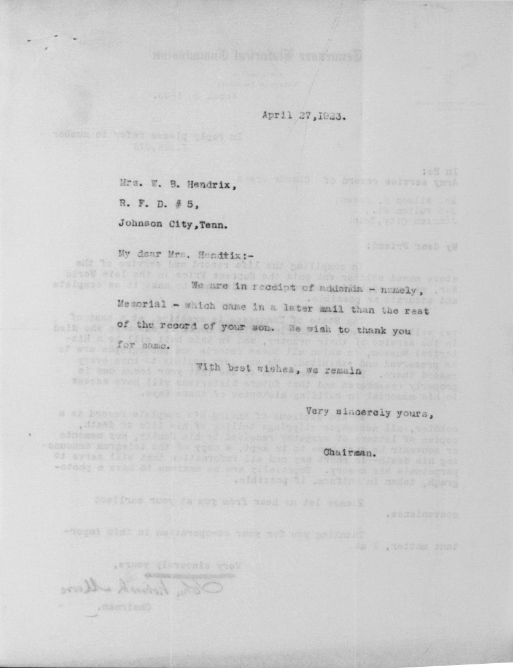 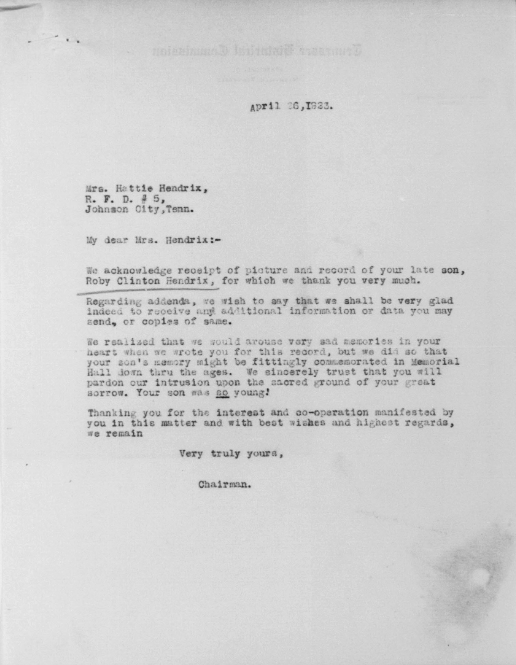 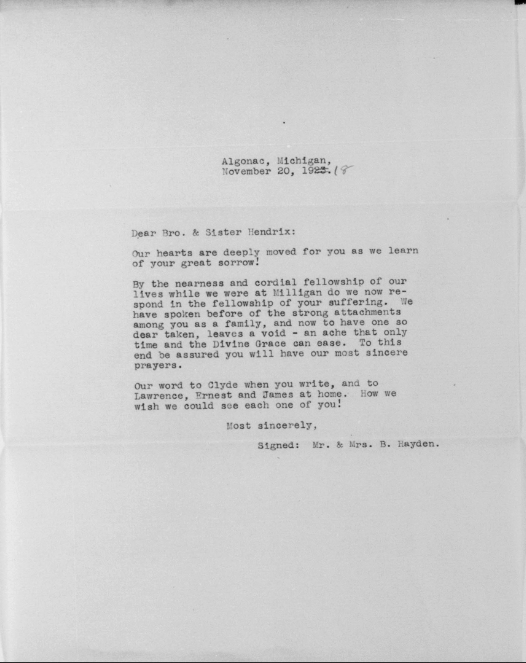 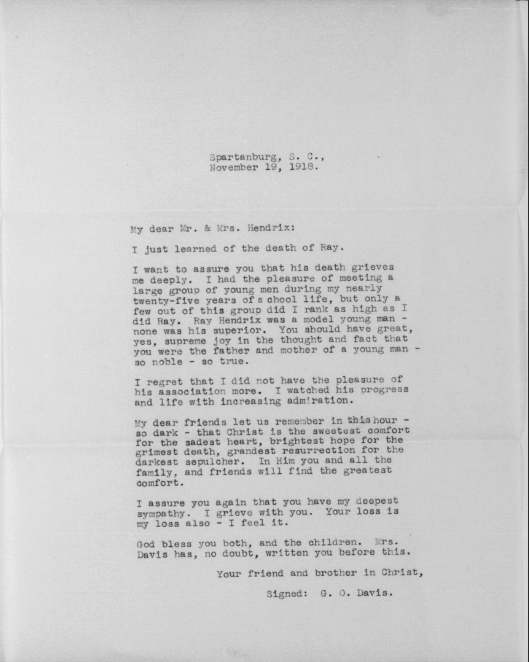 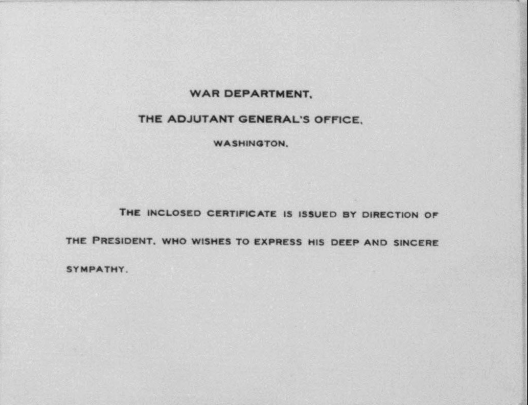 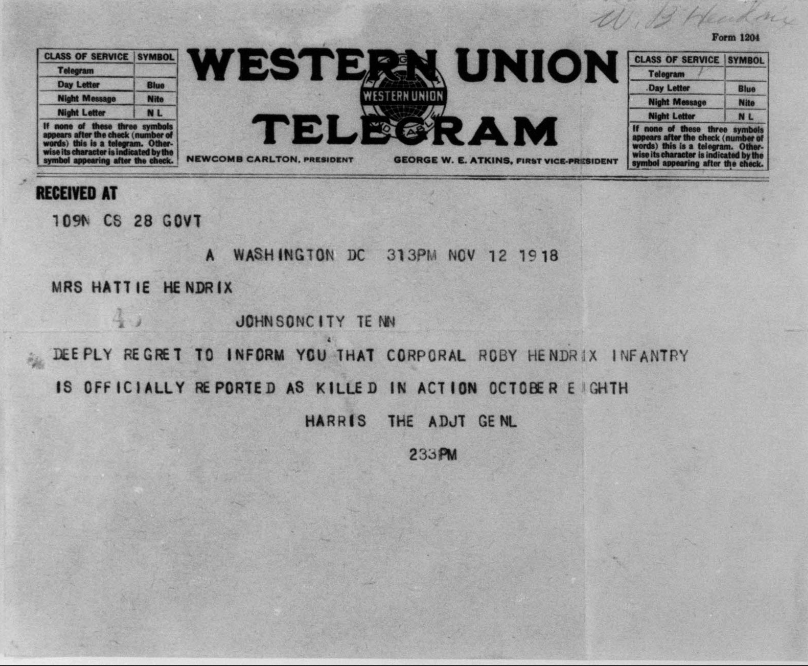 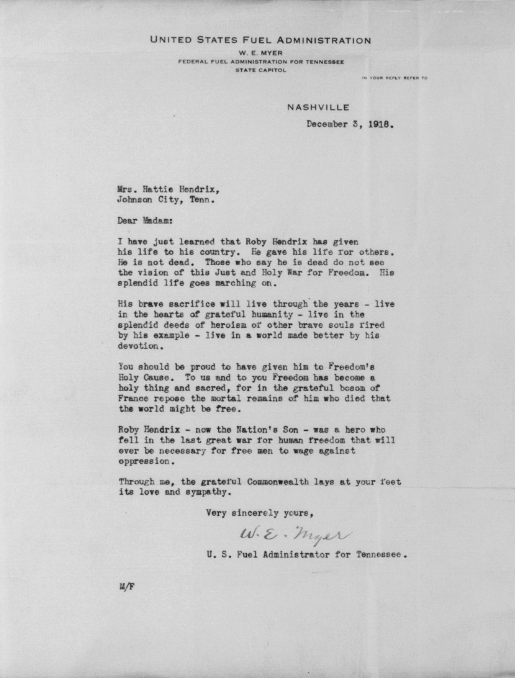 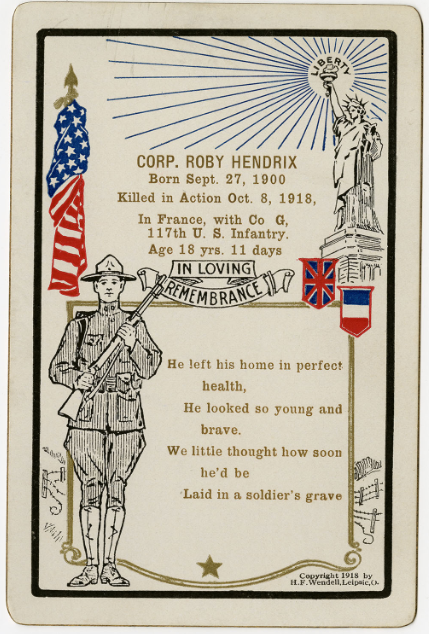 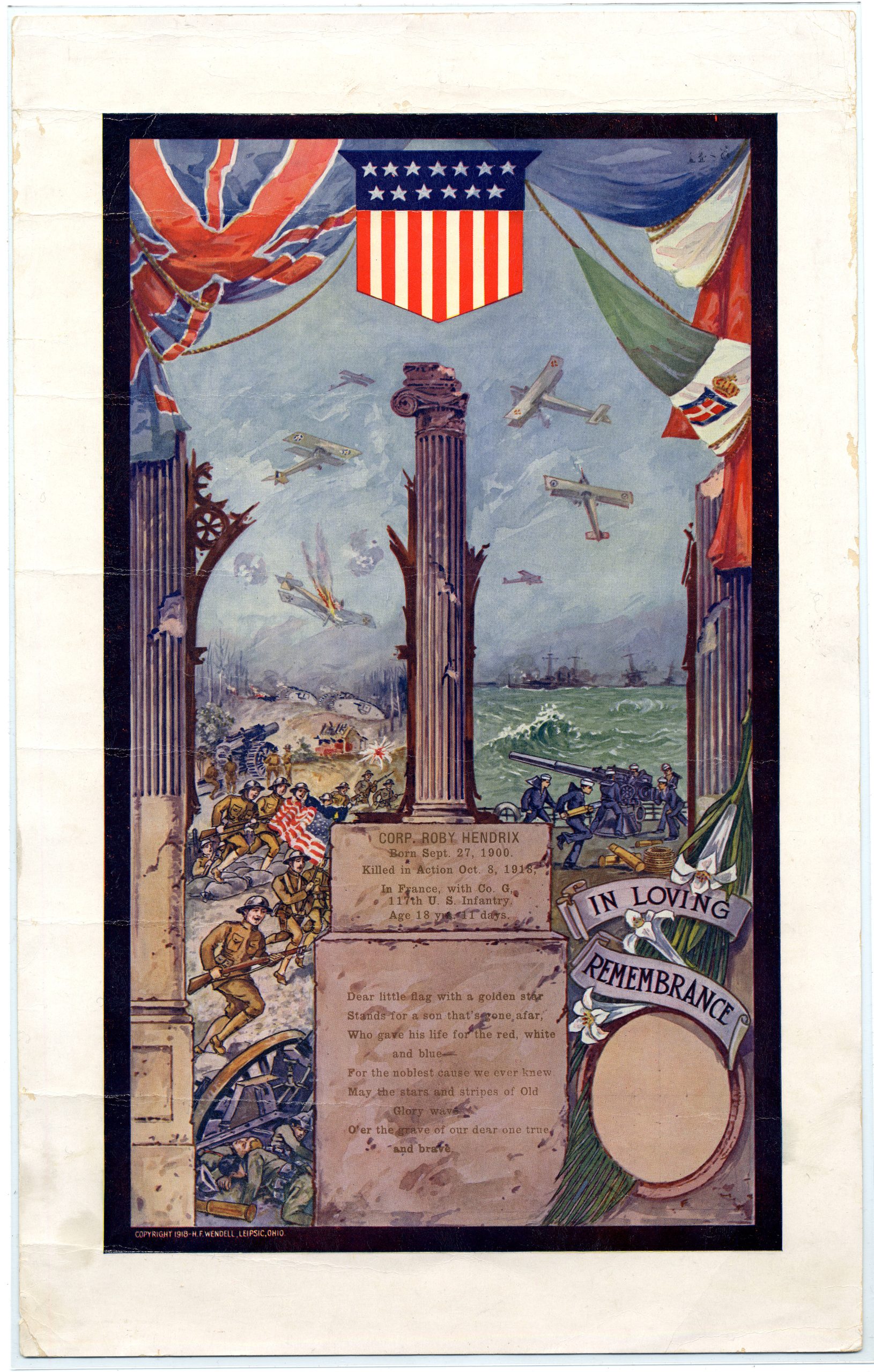 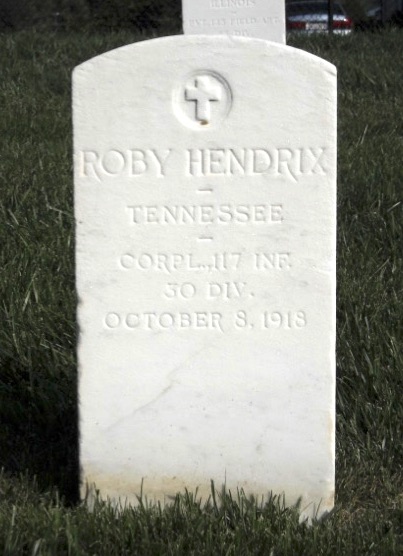