Captain William Nolan Roberts was born on 5 August 1905, the son of Frederick Brooks Roberts and Eva Amarath Duff. Hometown was Knoxville, TN. He is buried at Woodlawn Cemetery in Knoxville, TN.

He served as a Chaplain with the 874th Airborne Engineer Aviation Battalion at Lauringburg-Maxton Army Air Base in Maxton, North Carolina.

He was killed on 20 September 1943 while a passenger on the Douglas C-53D Skytrooper(DC-3), serial number 42-68729. Shortly after lifting off the runway, the pilot saw a C-47 coming straight at him. The C-47 was towing a glider, which released immediately after the glider pilot saw the planes were on collision course. Both pilots of the C-47 and C-53 took evasive action. The C-53 pulled hard left. He was unable to maintain control and the plane stalled. It entered a spin, crashed and caught fire.

The Knoxville Journal, September 21, 1943
Knoxville’s first chaplain to die in World War II, the Rev. William Nolan Roberts, 38, perished in the crash of an Army transport yesterday that took 25 lives. Mr. Roberts, whose home was at 1123 Island Hone Avenue, and who for six years was pastor of Jacksboro Baptist Church, had been an Army chaplain for two and one half years. The Crash in which 25 soldiers died, was at the Laurinburg-Maxton Army Air Base in North Carolina. The big ship, making a routine flight, burned after it struck the earth. An Army board of inquiry has been appointed. Mr. Roberts is survived by his widow, Mrs. Willie Atchley Roberts, two children, Miss Mary Evelyn Roberts and Fred Roberts; his parents, Mr. and Mrs. F.B. Roberts of Chattanooga and one sister, Mrs. W.C. Sherard of Norton, Va. The body will be brought here for funeral and burial, it was announced. 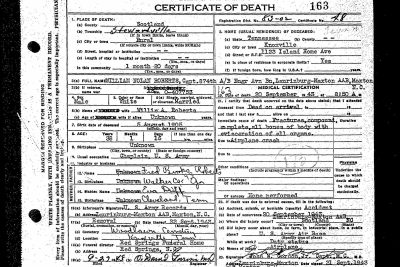 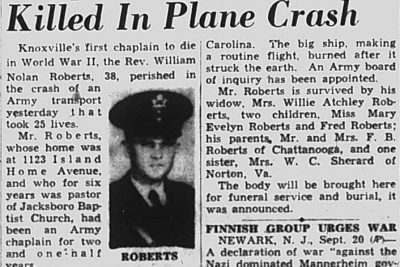 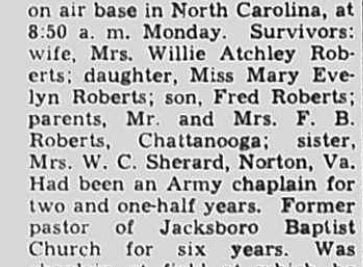 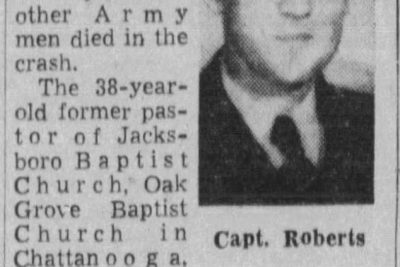