Died 23 January 1944Second Lieutenant33rd Fighter Group, 30th Fighter Squadron2nd Lt Reed was the pilot of aircraft P-40F 10CU with serial number 41-14450. He departed from Cereola Airdrome in Italy on a patrol mission.Statement from M/Sgt Dezo Romanovicz, Engineering Line Chief:“On 23 January 1944, I certify that I was present on the flight-line during preflight for an early mission. I supervised the preflight and removal of wing aileron covers and the removal of all excess frost from the wings and control surface.The mission was scheduled for take-off at 0615 with 2nd Lt Robert W. Reed in P-40F-10CU, A.C. No. 41-14450 scheduled for No. 4 position in a flight of twelve aircraft.The first of lead ship was airborne at approximately 0620 without incident. The second aircraft ground-looped midway down the runway and had to be removed by a crash truck. After this aircraft was cleared from the runway, No. 3 aircraft made a normal take-off at approximately 0640. Aircraft No. 41-14450 made a normal take-off run and when at the approximate height of 50 ft. seemed to stall and fall to the left, the right wing hitting a tree approximately 70 ft. distance from the edge of the runway. The aircraft immediately burst into flames, making it impossible to rescue the pilot.”

He was initially buried at Naples Allied Cemetery at Naples, Italy and was reburied at Sicily-Rome American Cemetery, Nettuno, Italy, Plot I, Row , Grave 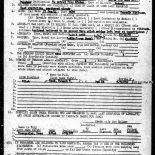 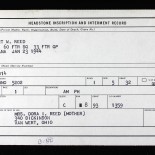