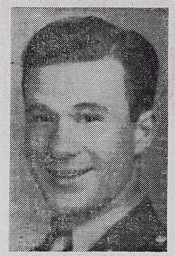 Scott County news, January 26, 1945
Mr. Gilbert G. Hall, Route No. 1, Oneida, Tennessee
Dear Mr. Hall,
It is with the greatest personal sorrow that I write to express our sense of loss in the death of your son and our comrade Private First Class Robert W. Hall, 34191151. He died on December 1, 1944, of wounds received in action on November 30, 1944, while we were engaged in a particularly hazardous undertaking in Western Germany. During the course of our participation in executing a hazardous mission, heavy enemy fire was encountered and the successful execution of our mission was endangered. Your son, Private First Class Hall, by his heroic actions on this occasion contributed materially to the successful execution of our mission, and in so doing was seriously wounded. Those of us who knew your son always respected him and admired him to his courage and devotion to duty. Your sorrow and ours in his loss is something beyond writing or speech. He was buried with a service of his church in our Army Cemetery in Holland. Very sincerely yours, Edgar J. Albrick, Captain, CE, Commanding