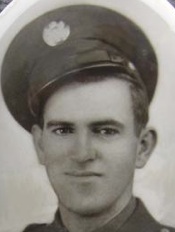 Pfc. Robert Verlin Turpin, 28, of Lakeside community, who was killed in action in Northern Italy on Oct. 25, 1944, while serving with the 85th Division of the 5th Army, will arrive in Madisonville Friday at 1243 p.m. Funeral services will be held Sunday at 230 p.m. at New Hope. Burial in the church cemetery, Kyker in charge.

American Legion Posts 65 of Madisonville and 70 of Maryville will be in charge of military honors.