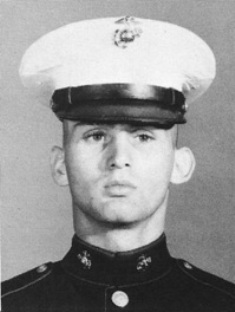 Private 1st Class Robert Taylor McJunkin was born May 11, 1949, and was originally from Chattanooga, Tennessee. He served his country in the Vietnam War in the United States Marine Corps, with G Company, 2nd Battalion, 5th Marines, 1st Marine Division, as a machine gunner. His tour in Vietnam began on June 23, 1968. Less than a month later, on July 16, 1968, PFC McJunkin was killed in an explosion in Thua Thien province, South Vietnam. He was 19 at the time of his death. PFC McJunkin is memorialized on the Vietnam Veterans Memorial on Panel 52W, Line 39; the following are further tributes to him:

I remember Bobby as a very sweet person.I thank him for giving his life that we may live free .
Posted by: Mrs Robert (Bob ) Bomar
Friday, August 11, 2006

I have no idea if we are related however the sacrifice you had offered for our continued way of life will never be forgotten. I hope you look down from heavens gates and know that your fellow marines are carrying on the tradition, Pride, and brotherhood that you exemplified.
God Bless and Semper FI
Posted by: SGT. Grant w. McJunkin U.S.M.C.
Relationship: Possible Relation
Tuesday, May 16, 2006