Robert Mathis was a cousin of James and Alfred Cantwell, who was also from Sneedville. James, Alfred, and Robert left together for the war. While in the army, their troop train stopped in St. Joseph, MO. The troops spent the night in a hotel. The bodies of James, Alfred, and Robert were found the next morning by troop members. Their death was a result of a faulty gas stove. Their bodies were returned by train to Lone Mountain. Family members were at the station to pick up the bodies of their loved ones. They transported them back to Sneedville by horse and wagons through rugged trails with very deep snow. It was a snowy, rugged, rough, and depressing trip back. All three were buried side by side in the Cantwell Family Cemetery, which is next to the Cantwell home place.
-Submitted by Kenneth Cantwell 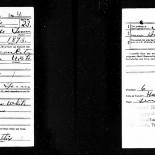 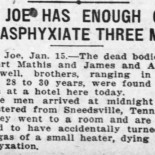 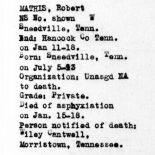 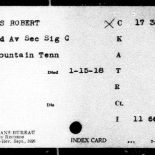 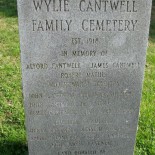