The crew posing to duplicate their caricatures in the nose art of Boeing B-29 Superfortress “Waddy’s Wagon”, 869th Bomb Squadron, 497th Bomb Group, 73rd Bomb Wing, 20th Air Force. Isley Airfield in Saipan, 24 November 1944.  Phillips is not pictured as is noted above. 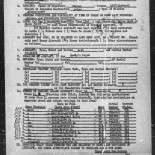 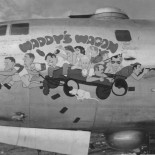 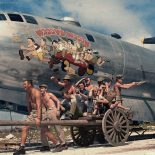