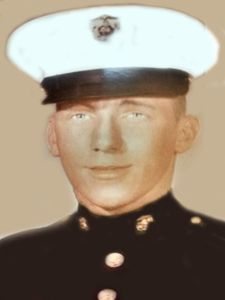 Lance Corporal Robert Lee Shaffer was born on May 12, 1948, and was originally from Elizabethton. He served his country in the Vietnam War with the United States Marine Corps as a combat engineer in C Company, 11th Engineer Battalion, 3rd Marine Division. His tour began on July 30, 1967. On February 2, 1968, LCpl. Shaffer was at a compound on the Cam Lo river in Quang Tri province, which was attacked by mortar bombardments by North Vietnamese troops; he was one of at least 11 American troops killed in the fighting. He was 19 years old at the time of his death. He is buried in the Pierce Cemetery located in a section of Elizabethton called “Dogtown.” LCpl. Shaffer is memorialized on the Vietnam Veterans Memorial, Panel 36E, Line 86.

The following is an online tribute left for LCpl. Shaffer:
Monday, September 25, 2000
Earlene Myers, Sister
My brother
You are my brother. I miss you and I want to thank you for paying the ultimate price for the freedom I take for granted. I can barely remember you. You have been gone so long. I know Mom was not happy until she was once again reunited with you in Heaven. Daddy is still missing you. I remember the morning you left home for Vietnam and I remember the smile you gave me as I stood in at the window watching you leave. I did not know I would never see you again. Had I known this I would have kissed you one last time. But I was only 5 and couldn’t understand the tears in Mom’s eyes I guess I thought you would be back later that day. But anyway, my brother, I miss you and I love you. I know that someday we will be together again and I can give you that kiss. Thank you for all that you have done for this country.

And from his friend, Dennis Davis:
Robert and I went thru training together and in DongHa Vietnam we would sit and talk. He was a very good friend and a good marine.
Camlo was heavily attacked by the north and had very little parameters of defense. After the attack, we fortified the compound with fences and mine fields. Robert and several other marines were lying under a truck and returning fire when they were hit by a satchel charge.
I think of him often, he had so much to give this world and we were robbed of his future contributions.