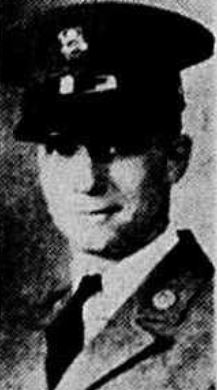 Bristol Herald Journal, March 11, 1945
Robert J. Johnson Jr., son of Mrs. Laura Johnson of Rice Terrace, was among the American prisoners of the Japanese who lost their lives in the sinking of a Japanese freighter last September 7, the War Department has just informed his mother. Mrs. Johnson was notified  two years ago that her son was a prisoner of the Japanese. In the same mail with the notice informing her that he had lost his life, Mrs. Johnson received a card from her son stating that he had been taken prisoner. There was no indication as to when the card had been mailed.

Robert Johnson was a member of 75th Ordnance. He was captured on Bataan and took part in the death march. He was sent to Mindanao as a POW. In September 1944, the Japanese began shipping POWs to Manila as American forces approached the Philippines. The POWs were put on the Shinyo Maru. The ship was hit by torpedoes from an American submarine off Mindanao. The Japanese had stated they would kill the POWs if the ship was attacked. To be true to their word, the Japanese shot the surviving POWs as they climbed from the ship’s holds. Those POWs who made it into the water were hunted down, by Japanese soldiers in life boats, and shot. Only 82 POWs made it to shore and were rescued by Filipino guerrillas. 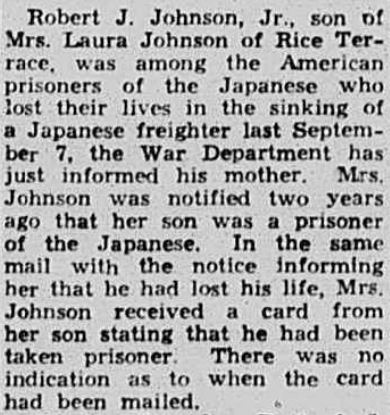