The Crossville Chronicle, September 16, 1948
Rites were conducted Sept. 5 from the family residence, Clifty, for Pfc. Robert H. Lewis, son of Mrs. Joe Lewis and the late Mr. Lewis. Interment with full military honors, was in Clifty cemetery. Pfc. Lewis was killed in France on Feb. 20, 1945, while serving with the U.S. Army. He entered the service in April, 1942 and was sent overseas four months later. He never received a furlough while he was in service. Letters from his commanding officer at the time of his death stated he did his duty without complaint. Besides his mother, he is survived by five brothers, Clyde, Ray, Leslie, Ben and Lawrence and four sisters, Mrs. Bessie Johnson, Mrs. Jessie Rogers, Mrs. Nota Bennett and Mrs. Nola Broom. 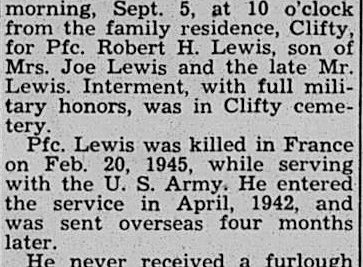