Robert Rainwater was transferred from NAS Tongue Point in Oregon on 3 July 1942 to serve on the U.S.S. Vincennes (CA 44).
A gallant attempt to prevent superior Japanese forces from endangering American newly won positions on Guadalcanal cost the U.S.S. Vincennes her life on August 9, 1942, in the first Battle of Savo Island. The heavy cruiser was virtually shot to pieces as Japanese surface ships sent 57 known shell hits and one torpedo into her hull and superstructure. Damage to the Vincennes was so extensive that loss was inevitable. Twenty-two officers and 14 enlisted men were killed and 46 officers and 684 enlisted men survived. Quick and thorough rescue work by American destroyers prevented a greater loss of life. 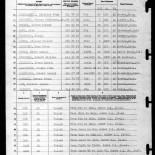 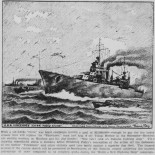