On 24 November 1943, at 0510, the U.S.S. Liscome Bay was struck by at least one torpedo on the starboard side aft of the after engine room. Other explosions followed immediately blowing off the after half of the flight deck and gutting the remainder of the ship, except for some portions forward of the island. Approximately twenty-three minutes later the U.S.S. Liscome Bay sank.

Memorialized at the Honolulu, Hawaii Memorial 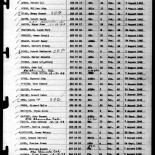