RAD3c Robert R. George US Naval Reserve was shipped aboard the USS Johnston DD-557. On 25th of October 1944, the Johnston was screening Taffy Three, a group of escort carriers supporting the landing at the island of Leyte in the Philippines. The previous night the Japanese had been defeated at the battle of Surigao Strait. Now the Japanese Central force had appeared and was attacking. The Johnston led the attack against the Japanese force of 12 Destroyers, 7 Cruisers, and 4 Battleships. Making smoke and firing rapidly its guns and torpedos, the Johnston fought receiving repeated hits from Japanese shells until she rolled over and sank at 10h10 along with 2 other destroyers sunk. The Japanese retired from the battle. Of the crew of 327, only 141 were saved.
The Captain of the Johnston, Commander Ernest E. Evans, was awarded the Congressional Medal of Honor. Taffy Three was awarded the Presidential Unit Citation.
Awards include Purple Heart, Navy Good Conduct Medal, Asiatic-Pacific Campaign Medal Phillippines Liberation Medal.
He is remembered on the Tablets of the Missing Manila American Cemetery, Philippines. 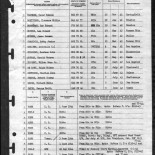