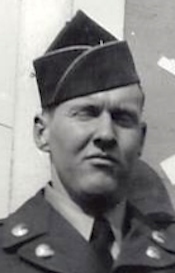 Corporal Robert Curtis Estes was a member of Company L, 3rd Battalion, 7th Cavalry Regiment, 1st Cavalry Division. He was killed in action while fighting the enemy in North Korea.

Funeral services were held February 3, 1952 at Catherine Ninney Baptist Church, Whitesburg. Interment was held at Bethesda Cemetery with the VFW in charge of services at the graveside.

Lenoir City News, October 22, 1951
Mrs. William Cole was notified last week by her father, Mr. C.O. Estes of Whitesburg, Tenn., of the death of her only brother, Cpl. Robert Curtis Estes, 21. Young Estes was killed in the battle of Heartbreak Ridge, Korea, on September 27, according to the message received by his father. He lived here with his sister and brother-in-law and was employed at the Cole Drive-In Theatre before entering service in February, 1951. He was sent to Korea in May of this year. The family will request the return of the body of their son and brother for burial at Whitesburg. Surviving besides father and sister are the following other sisters. 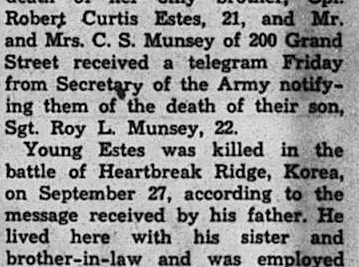