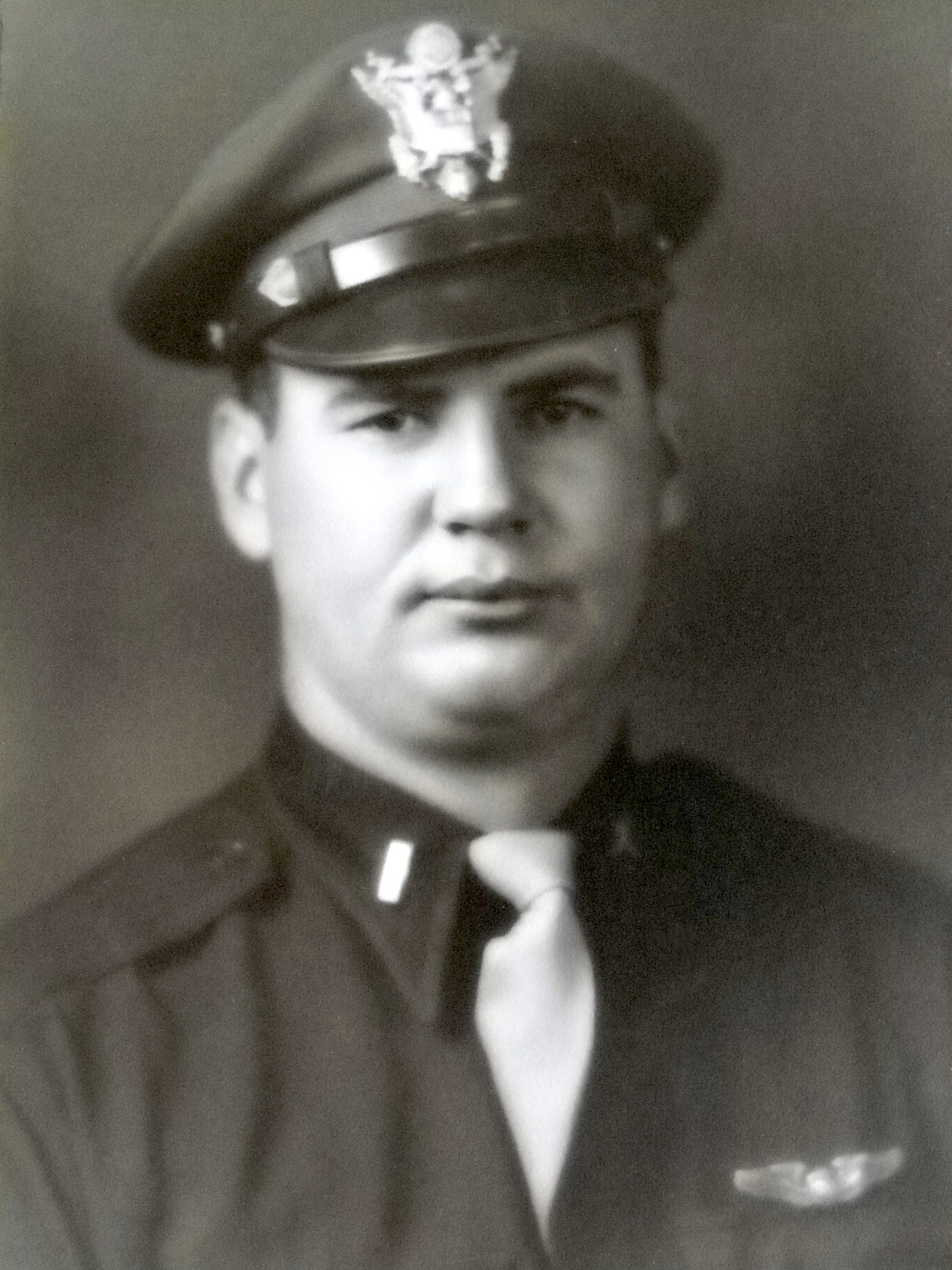 Robert was born on 19 September 1924 and raised in the Lamar Community of Jonesborough, Washington County, Tennessee. He was a graduate of Lamar High School, Class of 1943 and a veteran of World War II having served in the United States Navy as an Aviation Ordnanceman with Patrol Bomber Squadron 148 in the Pacific Theater 1944-45. After the war, Robert applied to the Navy to become a pilot, but was turned down. He reapplied later and was turned down yet again, but for another reason. So, he applied to the newly formed United States Air Force (USAF) and was accepted. The Navy released him, so he could serve with them. After completing his training and a Distinguished Graduate to boot, his dream came true and Robert became a USAF pilot.

Robert, a First Lieutenant now, was assigned to Detachment F, 3rd Air Rescue Squadron, Military Air Transport Service and reported for duty in the Republic of Korea on 28 October 1950. On 28 November 1950 a reconnaissance aerial photo mission was scheduled aboard the USS Leyte (CV-32), an Essex-class aircraft carrier to film Chinese and North Korean troop movements along their two borders. Composite Squadron 62 was assigned the task and Ensign William George Wagner, call-sign “WAG”, would fly the F4U-1P Corsair Photo Plane. Upon reaching the border and starting his film run, the aircraft was hit and “WAG” had to eject.

The 3rd Air Rescue was notified. They knew this was going to be a very risky mission due to the distance they would have to cover, nearly all of it behind enemy lines and the lateness of the mission start would put them into the hours of darkness. Robert’s H-5G Dragonfly #49-2009 helicopter was not equipped for night flying and had a maximum range of 280 miles on a full fuel load. Today, over 180 of those miles were to be flown behind enemy lines, so volunteers were asked for and Robert volunteered. He knew the risks, but he also knew a brother in arms was in big trouble and wouldn’t survive the night, so he volunteered along with Private First Class Desmond Wilkerson, a medical technician to rescue Ensign Wagner. The mission launched at 1500 hours (3pm) with two U.S. Navy fighter aircraft assigned to fly cover. Upon reaching the Manchurian border, they located “WAG” and rescued him. On the return trip the enemy lines kept shifting and at 1915 hours (7:15pm) he radioed the escort fighters that he was out of fuel and had to land. He was 10 miles north of Airfield K-29 at Sinanju, North Korea. That was Robert’s last radio transmission.

Robert, “WAG” and Desmond were discovered by a U.S. Army patrol and interred at the United Nations Cemetery at Pyongyang, North Korea. That too, fell to the Chinese and North Korean forces days after and Robert’s remains were not returned to U.S. Forces until 1955. He now rests in Monte Vista Memorial Gardens, Section 19, Lot 15, Space 2 in Johnson City, Tennessee.

For his actions on that evening, Robert was awarded our nation’s second highest award for bravery and valor, the Distinguished Service Cross. He also received a Purple Heart, National Defense, Korean Service, United Nations and Republic of Korea War Service Medals. His unit was also awarded the Republic of Korea Presidential Unit Citation along with all the honors he received during World War II.

Robert was 26 years old and the son of Charles Hubert “Charlie” Parker and Sarah Lyle. He was married to Janelle and they had no children. Robert’s older brother was a C-47 pilot in the United States Army Air Forces during WWII.
-Submitted by Allen D. Jackson, USAF (Ret)

Distinguished Service Cross citation:
The President of the United States of America, under the provisions of the Act of Congress approved July 9, 1918, takes pride in presenting the Distinguished Service Cross Posthumously to First Lieutenant Robert Blaine Parker AFSN A0-18003, United States Air Force, for extraordinary heroism in connection with military operations against an armed enemy of the United Nations while serving as a Rescue Helicopter Pilot with Detachment F, 3d Air Rescue Squadron, in action against enemy forces in the Republic of Korea on 28 November 1950. Lieutenant Parker departed Anju, Korea, and flew an unarmed helicopter more than ninety miles over enemy occupied territory in an attempt to rescue a naval pilot downed near the Manchurian border. Lieutenant Parker undertook this hazardous mission fully aware that hostile opposition could be expected and the return flight would tax the maximum range of the craft and involve night flying for which it was not equipped. Aided by two naval fighter aircraft in the area, he located the pilot, with utter disregard for possible sniper fire, landed the helicopter and effected the rescue. During the return flight, this mission was further imperiled by darkness, poor visibility and a dwindling fuel supply. Despite the odds against him, Lieutenant Parker bravely continued on until he reached friendly lines but crashed while attempting an emergency landing. Lieutenant Parker’s extraordinary act of heroism in which he gave his life, and consummate devotion to duty reflect untold glory on himself and the noble traditions of the United States Air Force. 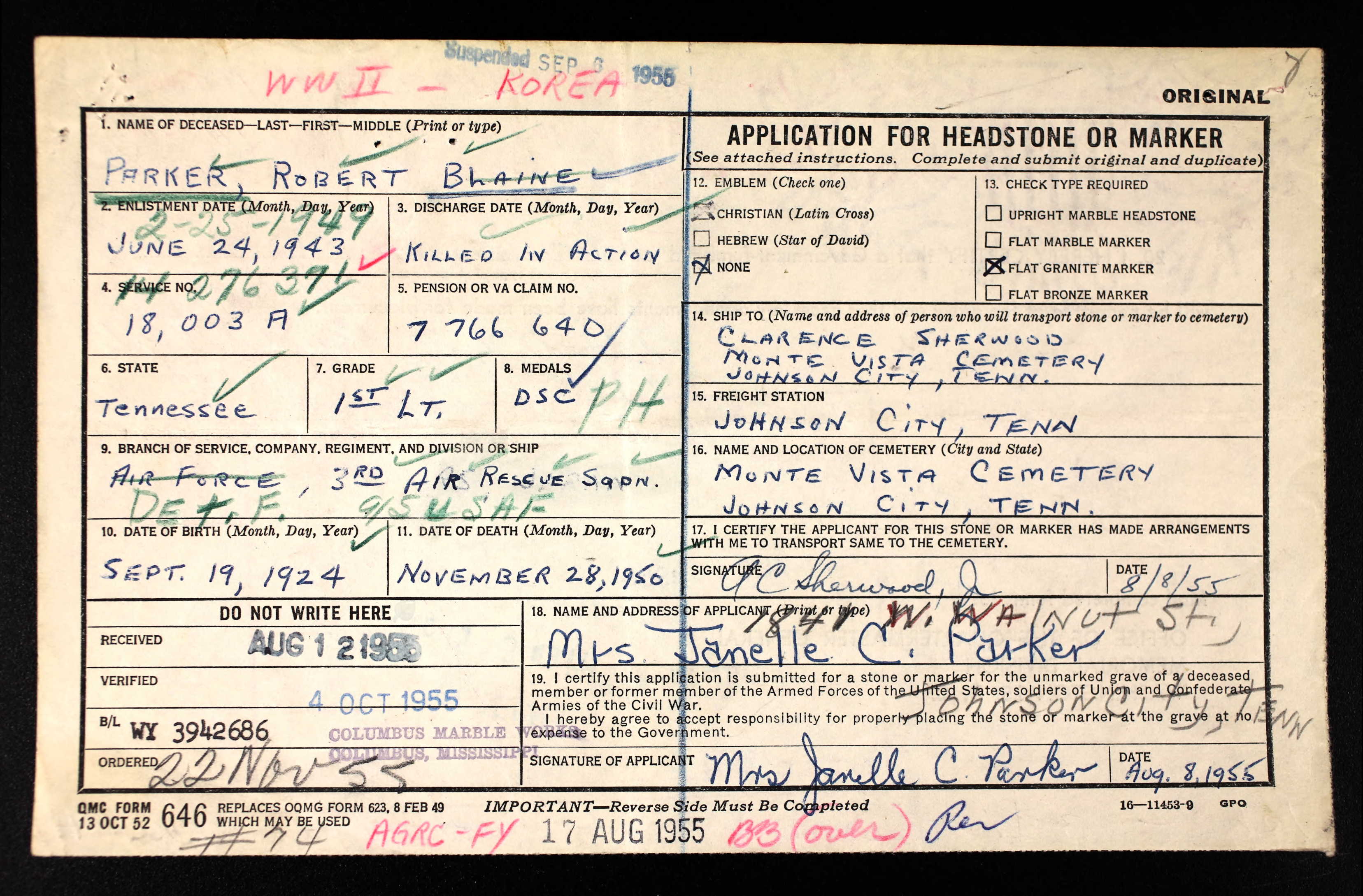 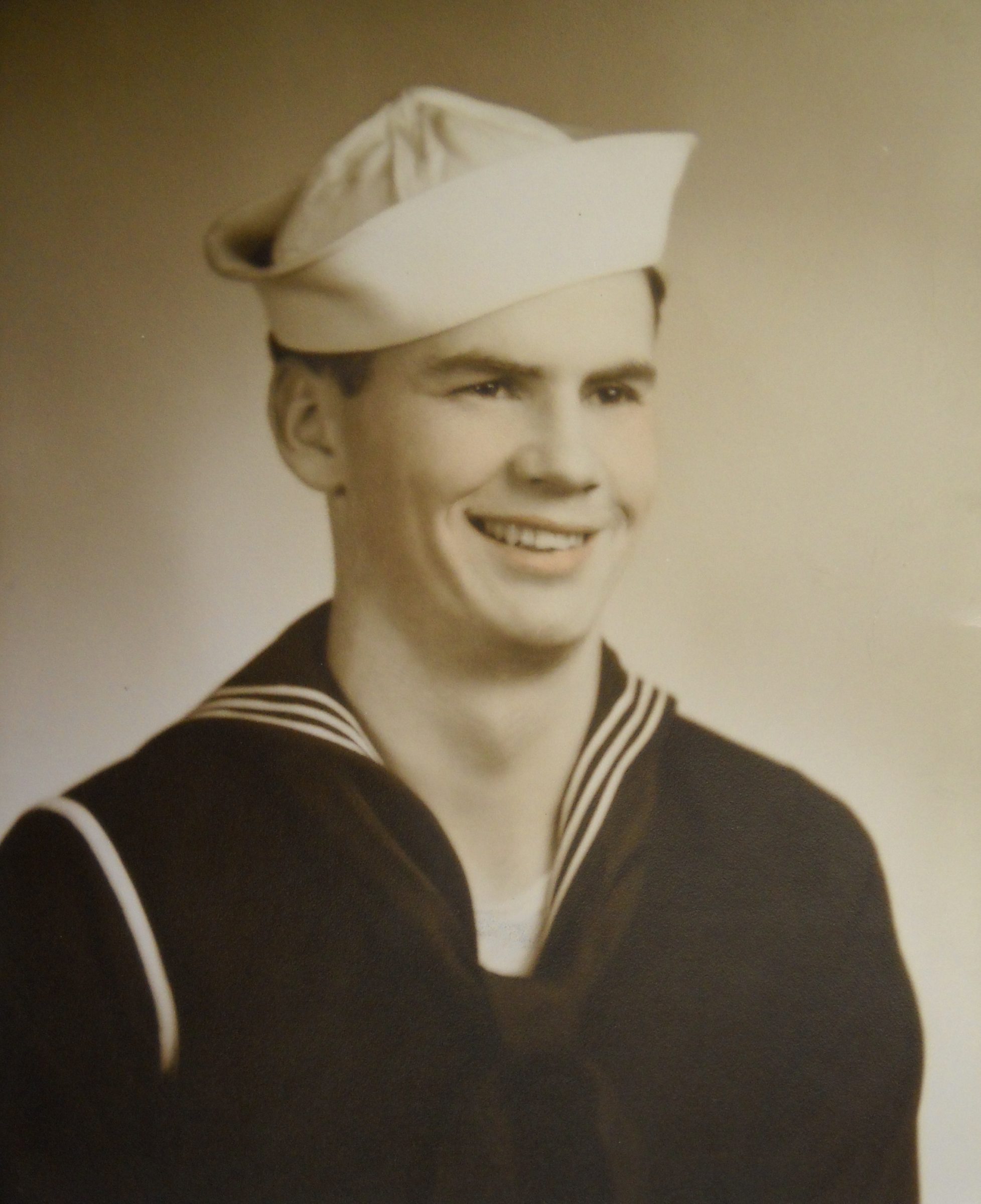 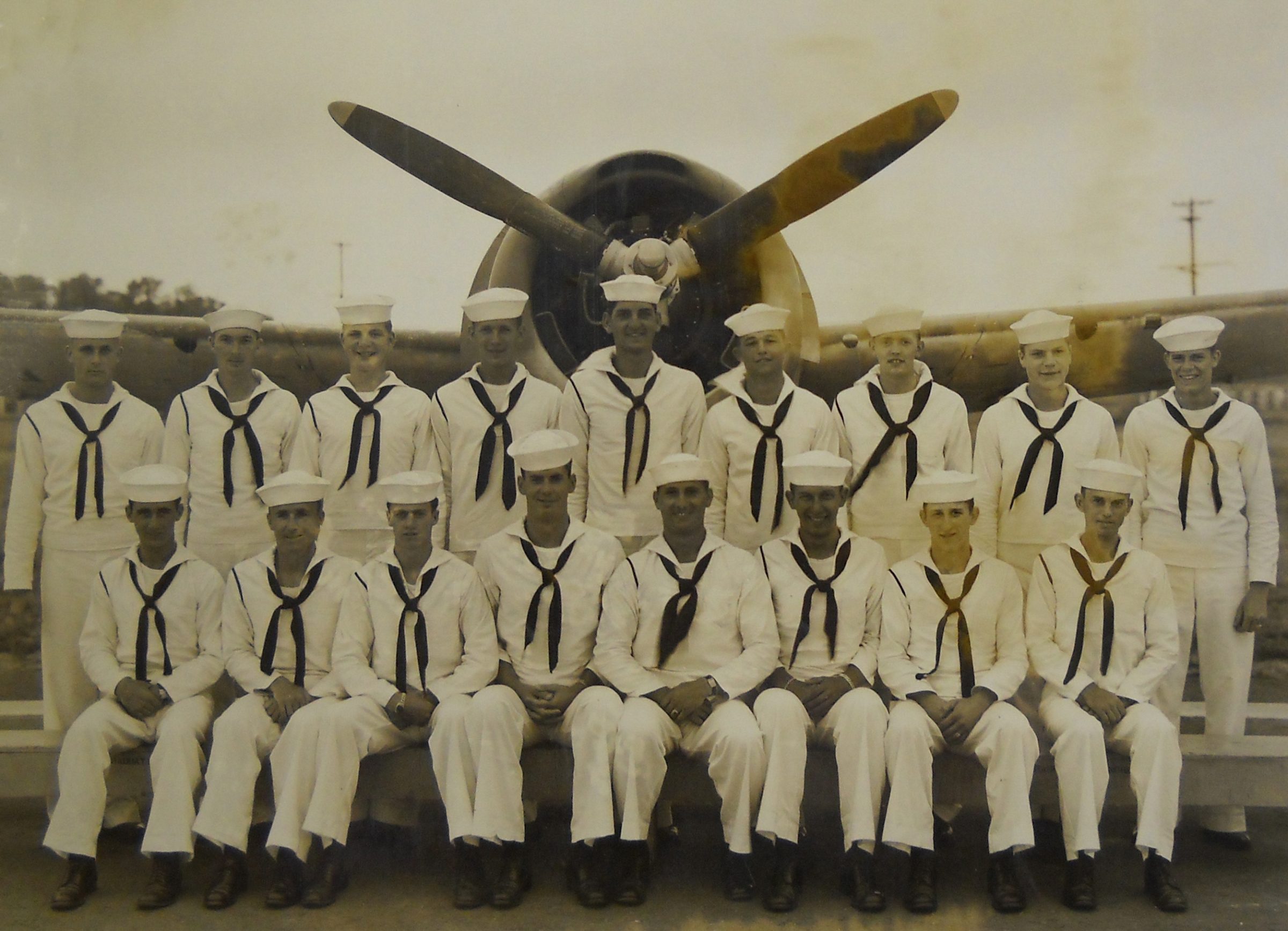 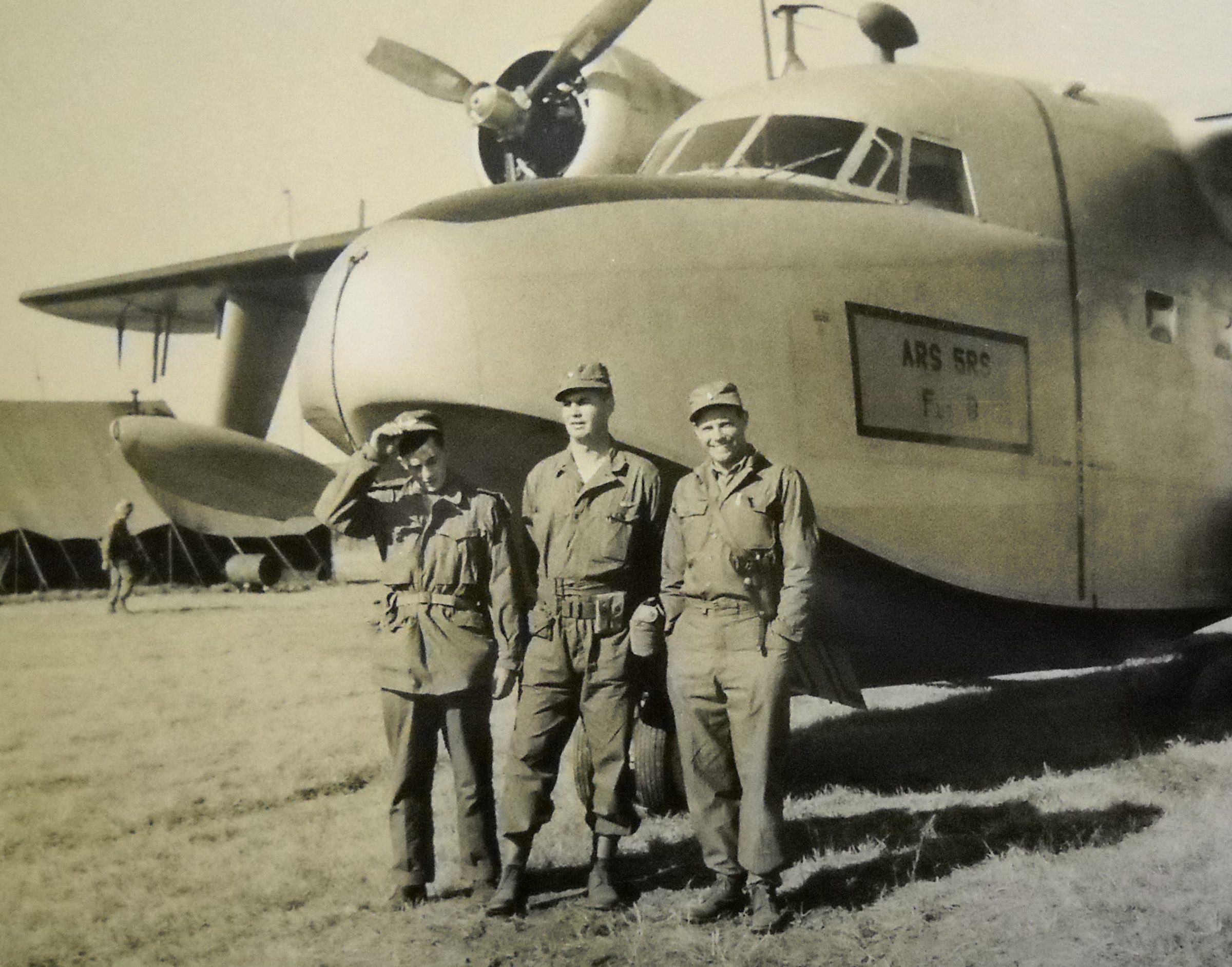