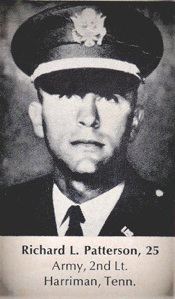 First Lieutenant Richard Lee Patterson was born on November 23, 1943, and was originally from Harriman, Tennessee. He served his country in the Vietnam War in the United States Army, as an infantry unit commander in B Company, 2nd Battalion, 505th Infantry, 82nd Airborne Division. His tour in Vietnam began on April 7, 1969; less than 2 months later, on May 29, 1969, 1st Lt. Patterson was killed under hostile conditions in Binh Duong province, South Vietnam. He was 25 years old at the time of his death. 1st. Lt. Patterson is buried at Roane Gardens Memorial Cemetery in Rockwood, Tennessee, and is memorialized on the Vietnam Veterans Memorial on Panel 23W, Line 17. The following are online tributes left for 1st. Lt. Patterson by his family and friends:

Richard Hill
We served together at Ft. Dix, NJ
A true friend forever alive in my mind
Dick and I met at Ft. Dix, NJ where we took Basic Training and Advanced Infantry Training together. We were bunk mates, We were scheduled to go to OCS after our training at Dix, we were both engaged to be married as soon as we graduated from OCS. I graduated from Engineer OCS, went to Germany and saw the Life Magazine with the photos. It was like a punch in the gut. Dick was the best. He was a leader even as a Private E-1. I went to Vietnam in 1970 and continued my career until retirement in 1991. It is over 40 years since we were together. As I get older, I often think of him and so many others, always young. Such men are still out there serving and giving the ultimate on behalf of people who fail to understand such sacrifice. We should salute each of these heroes.
Richard D. Hill
LTC, USA (Retired)
May 14, 2008

Doug Dillon
Richard
It has been about 38 years since we last spoke. It was at the Infantry School at Ft. Benning, August 1968, you were an OC and I was a 2ndLT just from Ft. Sill. Your class was moving out and I was undergoing the Instructors Training Course. You came up to me in the hall and ask me “Are you Doug Dillon and did you go to Tenn. Tech. Univ?” You introduced yourself and we spoke briefly as each of us had to go. I regret not being able to get back to you. I saw your picture in that magazine in August 1969, while I was in the field as a FO attached to the infantry in I CORP. I have tried to remember our association at Tech. I even went back to Tech and looked you up in an annual. We both graduated in 67/68, you were in business and I was in biology, and I am sorry that I cannot remember. That is now a growing problem for me, I cannot remember things I want to remember or should remember, but I cannot forget things I would really like to forget. I had visited this site a few years ago and thought I would do it again. I do regret your step-son’s comments are not here. It was a hell of a tribute, my friend; he stated “I was only five when you came into our lives. I will never forget the love you showed for my mother and me. You will not be forgotten”. This gives me comfort and until we meet again may your spirit know a peace beyond comprehension.

John Kieffer
My Tac Officer
Officer Candidate School, 53rd Company
Lieutenant Richard Patterson was one of our Tac Officers in 53rd Company, Infantry Officer Candidate School (OCS), Ft Benning, Georgia from November 1968 to the first few months of 1969. I was an Officer Candidate and knew him as one of the sharpest officers I had ever met. He was a no non-sense, “by the book” officer that with great effort prepared us physically, emotionally, and intellectually for the rigors of combat as future Infantry platoon leaders. He got orders for Vietnam before our class graduated and, as life went in the Army at that time, he was replaced with another 2nd LT. Our class went on to graduate being commissioned 2nd LTs ourselves on 6 May 1969. On 6 July 1969 LIFE MAGAZINE did a piece titled “One Week’s Dead: May 28 – June 3, 1969” that I read while stationed at FT Ord, CA. It featured the photos of every man killed in Vietnam that week. On one of the pages was Lieutenant Richard Patterson’s picture. That is how I found out that he had been killed in Vietnam. His efforts as an Infantry OCS Tac Officer instilled in me many of the attributes that would help me through my own tour as a Infantry platoon leader in Vietnam. Rest in peace, Sir.
LT John A Kieffer, 5th Infantry Division, Vietnam, Dec 69 – Dec 70
Tuesday, August 28, 2001

Richard could do it all. And do it with ease. A gifted athlete, an avid hunter and fisherman. He was one of the good guys. He was a friend during high school and even though he was three years older he looked out after me. At college he gave me rides back and forth to TTU. I played ball with him in college and was blessed to know him pretty well. He treated my Mom and Dad kindly. My parents were crazy about him. I enjoyed knowing him for most the first two decades of my life. I looked up to him. I admired him and he deserved all that and more. I think of him often. His look-a-like cousin is my dearest friend.
Kind regards and my best to his family. Be proud.
david yeary
Monday, May 26, 2008

On this 38th anniversary of Richard’s death, I think it is important to remember the life well lived. His legacy of respect is reflected on his gravemarker: “Leadership is a priviledge of a few. A man as a leader embraces a priviledged postion endowed upon him by other men because of his attributes visible to them in mind, heart, and soul. The symbol of leadership and sacrifice is reflected by the words of one who was there…”He inspired and led his men with the courage and training of a devoted individual. But most importantly he cared about his men”. In death as well as life his example lives in our country, a stimulus and encouragement to all who have the soul to adopt it.
Posted by: Kay Patterson Austin
Relationship: Widow
Tuesday, May 29, 2007

My husband was with the 1st the night they were ambushed.
Posted by: June Cross