Captain Johnson was the pilot of aircraft P-38 LI with serial number 44-24871, nickname My Pet. He departed from Lingayen strip on an B-24 formation escort mission to Hong Kong, China. He is memorialized at Manila American Cemetery.

Statement from 2nd Lt Robert J. Rouse.
After remaining over the target for an hour our flight started home on a course of 170 degrees. The name of our flight was Ping Ping Red, and the line up on the flight was as follows; Major Bixby was the flight leader with Captain Johnson flying his wing. Lt Maucher was leading the element and I, Lt Rouse was tail end Charlie.
After flying for approximately forty five minutes on the course of 170 degrees, Capt Johnson started loosing altitude and falling back out of formation. He called Major Bixby and told him that he was going on single engine and to wait for him. Major Bixby made one three hundred and sixty degree  circle at angels nine and continued the course of 170 degrees. I imagined at this time that Capt Johnson was alright and catching up with up as we had started on course and no one was sent back to fly Capt Johnson. After flying on course of 170 degrees for four or five minutes Major Bixby instructed me to go back and fly with Capt Johnson. I asked him his angels, course, and air speed. He replied that the was at angels six with an air speed of one hundred and seventy mph and on the course of 170 degrees. I immediately let down to angels six for approximately five minutes. I did not find him but had radio contact with him. He then called me and said that he had both engines running and was still on course. I then started out on that course of 170 degrees. I called Major Bixby and asked him where the course of 170 degrees would take us. He replied that we would end up at San Marcelleno in Luzon.
About fifteen minutes later I heard someone say that Ping Pong Red Flight had changed to a course of 150 degrees, so I called Major Bixby and confirmed the heading. I then contacted Capt Johnson and told him and he acknowledged the heading. Shortly afterwards Red Flight turned to a heading of 140 degrees and presuming that they were lost, I called Capt Johnson and told him that I was turning to a heading of 120 degrees. He acknowledged but said that he was not receiving me clearly.
After two and one half hours from the target I heard Capt Johnson call me and say that he was going under an overcast and wondered if I had passed it yet. I replied that I had just come out of it and would circle until he came out. I must have circled for five minutes and could not find him, so I continued on the course of 120 degrees.
The last I heard of Capt Johnson was when I told him that I was cutting back to a setting of 1600 R.P.M. and 25 hg. He said that he only had seventy gallons of gas left and I said that I only had about ninety gallons. He also mentioned that he had been flying at a setting of 1600 R.P.M. for a half an hour. I could not contact him anymore but heard call Lt Bellusci and ask him if his flight had sighted land. I then returned to a setting of ninety degrees.
I turned on my emergency I.F.F. and tried to contact August Crystal on D Channel. After approximately ten minutes I contact August Chrystal and they gave me a heading of 93 degrees. Later on they gave me a heading of 111 degrees. I then sighted land. I didn´t know where I was and told August Chrystal that I had approximately one half an hour gas supply left. As soon as I reached land I could see that I was about forty miles north of San Jose, Mindoro. 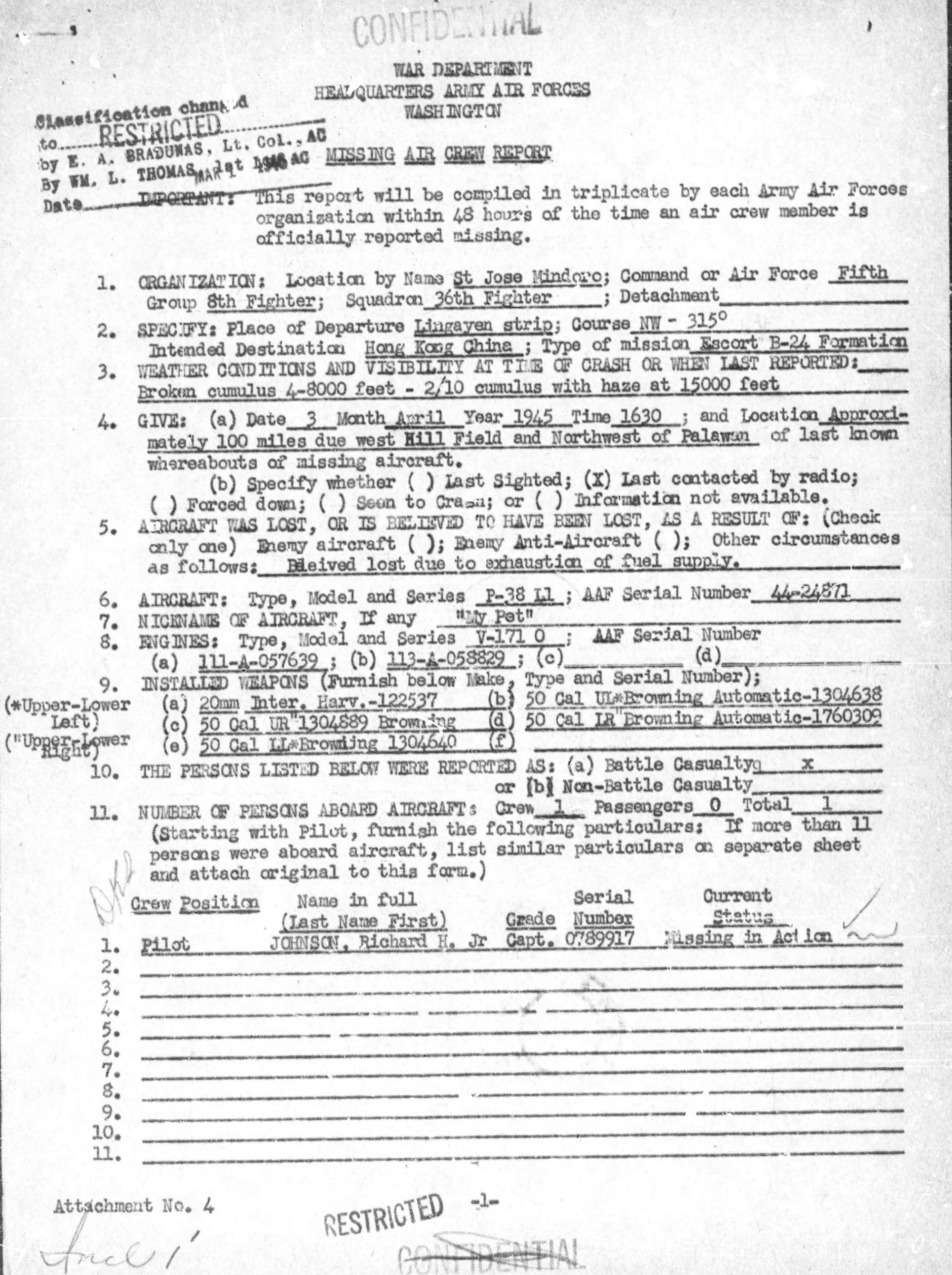 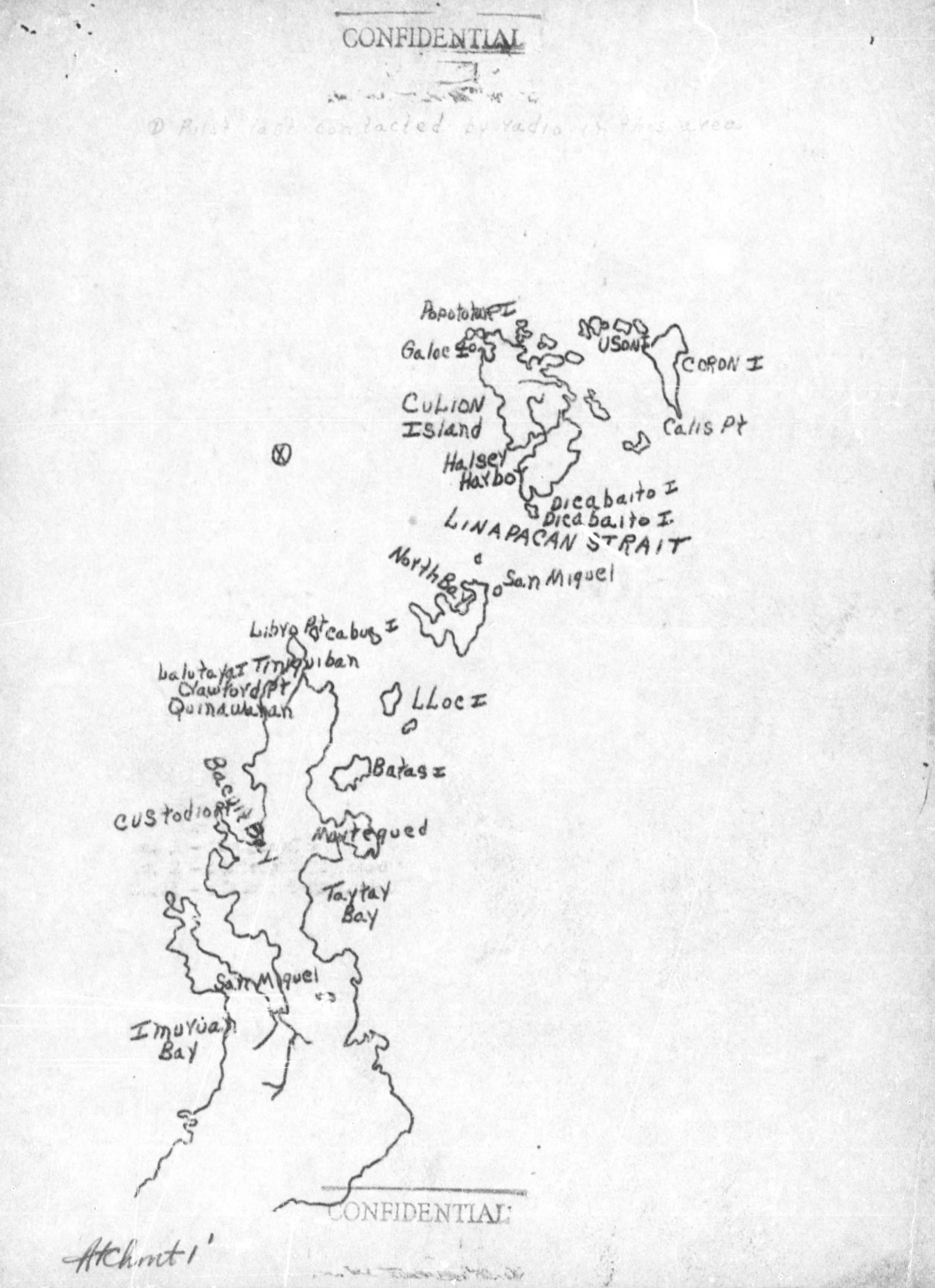