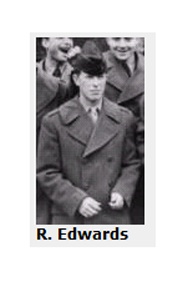 Flight Officer Richard E. Edwards served as a Navigator aboard the B-24HSH with serial number 41-28910 of the 858th Bomber Squadron, 492nd Bomb Group flying Carpetbagger Missions for the OSS. He died on 19 April 1945 when his B-24 was shot down off the Coast of Norway. He is listed on the Tablets of the Missing Cambridge American Cemetery. Awards include Air Medal with Oak Leaf Cluster.