Storekeeper 2nd Class Rex (G.) Gale Boardman  was a passenger on the U.S.S. Henderson sailing on 27th March 1940 from San Francisco, California to Honolulu, T.H. He served on the U.S.S. Langley and is missing since 27 February 1942 at a result of the sinking of the U.S.S Langley by enemy action. He was officially declared dead on 15 December 1945 and is listed on the Tablets of the Missing, Manilia American Cemetery, Philippines.

USS Langley was bombed off Tjilatjap, Java by the Japanese on February 27, 1942. The first and second Japanese strikes were unsuccessful, but in the third Langley took five hits and 16 crewmen were killed. The topside burst into flames, steering was impaired, and the ship developed a 10° list to port.[9] Unable to negotiate the narrow mouth of Tjilatjap harbor, Langley went dead in the water, as her engine room flooded. At 13:32, the order to abandon ship was passed. Her escorting US destroyers fired shells and torpedoes into Langley to scuttle her. After being transferred to USS Pecos, many of her surviving crew were lost when the USS Pecos was sunk en route to Australia.

Photo below of USS Langley being abandoned. 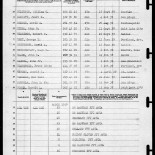 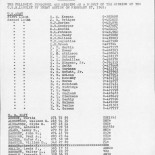 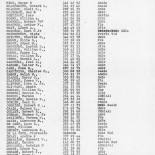 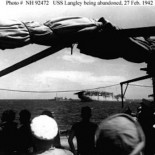