Kingsport News, 13 March 1943
Mobile, Ala. – Staff Sgt. Rex Cowan Newman, 22, received fatal injuries in the crash of a training glider near Craig Field at Selma, Ala., Capt. C.H. Moyer, adjutant at the army glider school near here, announced Friday.
Captain Moyer said the crash occured during a routine training flight and that an army investigation had been launched by Craig Field authorities to determine its cause.
Sergeant Newman had been in the army seven and a half months and was attached to the 18th army air forces glider training detachement at Bates Field.
His next of kin was listed as his mother, Mrs. Ossie Cowan Newman, 105 Spruce Street, Bristol, Tenn. 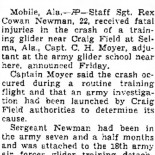