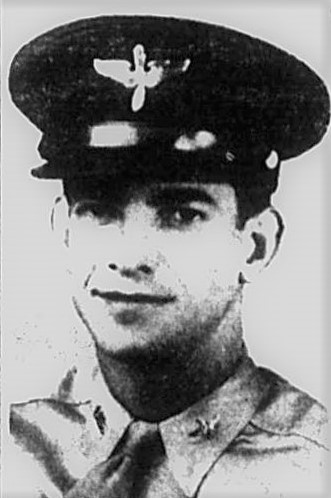 Kingsport News, 2 July 1943
Batesville, Ark. – Aviation Cadet Reuben E. Tallant, 25, son of Mr. and Mrs. Fred A. Tallant, Clinton, Tenn., was killed instantly Thursday when his plane crashed near Newark, Ark.
Officials at the Newport army air base said the plane crashed on a routine training flight.
Witnesses of the crash said Cadet Tallant attempted to jump from the falling plane but the shrouds of his parachute caught on the fuselage and he was pulled to his death as the craft hurtled to the ground.

Clinton Courier News, July 8, 1943
Anderson County added another Gold Star to her service flag last week when the training plane in which Aviation Cadet Reuben E. Tallant was fluing went into an accidental spin and crashed. Cadet Tallent attempted to abandon his airplane and use his parachute, but eye-witnesses say he aparently opened the parachute before properly clearing the airplane, and the parachute became entangled with the plane structure. He was instantly killed in the crahs. Details of the accident were sent Cadet Tallent’s parents, Mr. and Mrs. Fred Tallant of Clinton and to his wife, Mrs. Aileen Peoples Tallant , by Col. Daniel A. Cooper, commanding officer, Newport Army Air Field, Newport, Ark.
In another letter, Capt. Graydon J. Jones, commandant of cadets at the fields, wrote Mrs. Tallant “Your son was a good soldier, which, in Army terms, is the highest compliment one can receive. He measured his actions by standard of honor that made him true to himself, to his duty, and to his fellow cadets. It is our hope that you will have gained comfort and consolation from the thought that your son died in service of his country.”
Cadet Tallant enlisted in the Army Air Force in January and had been stationed at the Arkansas field for two months. Prior to his enlistment, he was employed at Alcoa. The young man was a graduate of Clinton High School and later attended UT. He played basketball at Clinton High. A year ago this month he was married to the former Miss Peoples of Clinton. The body was accompanied to Clinton by Aviation Cadet Malcolm J. Wilkins of Pennsylvania, and services were held at Memorial Methodist Church. Burial was in Sunset Cemetery with the American Legion and the State Guard participating in the military ceremonies.
Cadet Tallant, in addition to his parents and his wife, is survived by a brother, Fred Tallant of Williamsport, Pa., and four uncles, D.S. Turner, Will Turner, and John Turner of Knoxville and the Rev. Harvey Tallant of Clinton. 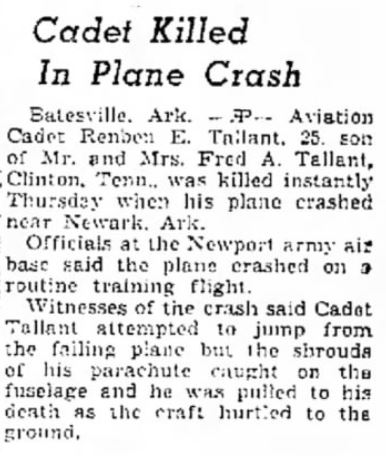 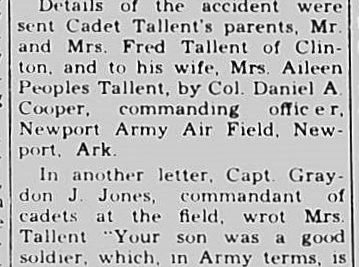