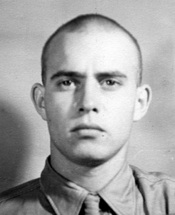 Reginald Varnell Johnson
Missing in Action – Presumed Dead
Sergeant Johnson was a member of Weapons Company, 3rd Battalion, 7th Marines, 1st Marine Division. He was listed as Missing in Action while fighting the enemy in South Korea on December 7, 1950. He was presumed dead on December 8, 1953. His remains were not recovered. His name is inscribed on the Courts of the Missing at the Honolulu Memorial. Sergeant Johnson was awarded the Purple Heart with Gold Star, the Combat Action Ribbon, the Korean Service Medal, the United Nations Service Medal, the National Defense Service Medal, the Korean Presidential Unit Citation and the Republic of Korea War Service Medal.