Technical Sergeant Raymond L. Jones was born on January 24, 1915. He was the son of Wootson Jones. He had six brothers, Lacy Jones, Harrison Jones, Burl A. Jones, Carl Jones, Kelly R. Jones, and Harvy Jones. He also had two sisters, Jennie Jones and Challie Jones. He was the grandson of Bledsoe Jones. Technical Sergeant Jones enlisted in the military and served in World War II in the 345th Infantry. Sometime in his life, he lived in Quay, New Mexico, which is listed as his official residence by the military. During his service in Korea, he was a member of the 19th Infantry Regiment, 24th Infantry Division. He was killed in action while fighting the enemy in South Korea on August 3, 1950. He is buried in Batley Cemetery in Clinton, Tennessee. 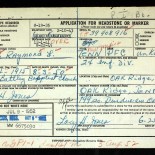